Gregor Townsend reserved special praise for Stuart Hogg on what was a record-breaking day for his skipper despite the defeat to South Africa.

Hogg became the most capped full-back of all time in international rugby, eclipsing Irishman Rob Kearney’s record with his 87th start in the No.15 jersey in a Test match in Saturday’s Autumn Nations Series clash at BT Murrayfield.

The Scotland captain marked the occasion by scoring two tries to take his tally for his country to 24, drawing him level with Ian Smith and Tony Stanger as Scotland’s joint top try scorer, but it was not enough as Makazole Mapimpi scored a double of his own to help South Africa prevail 30-15. 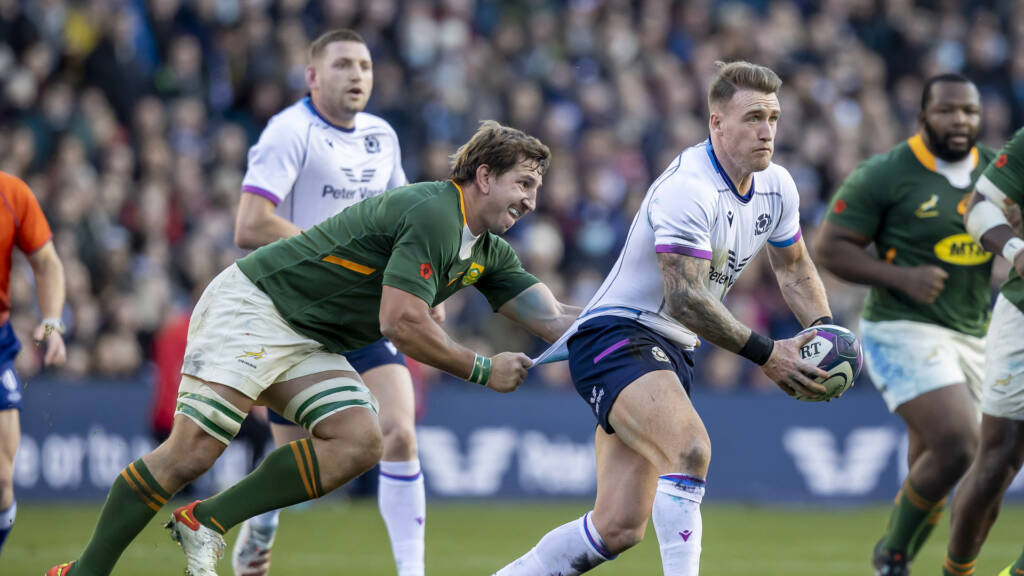 “It shows what a great player Stuart has been, consistently a high-level player to have got that milestone.

“And then on the day he does break that record, he scores two tries for his team against the world champions – that just shows the quality of the player.

“And to equal the try scoring record, I know it’s an individual thing and we are all pretty confident he will go and break the record over the next few games or few years, because there’s a lot of years left in him.

“He’s been a brilliant captain for us over the last two seasons and he showed his quality today again.”

For his part, Hogg said he would not be able to reflect positively on his personal achievements until he had calmed down from the disappointment of coming off second best against the world champions.

The Exeter Chiefs star said: “I think maybe in a couple of hours’ time, when I’ve calmed down a little bit and settled in, I’ll maybe think back on that.

“My focus now is to make sure that we recover well and the boys are physically and mentally in a great place come Monday.”

Hogg’s frustration boiled down to Scotland’s inability to convert a first-half lead into a victory, the captain suggesting his side “shot themselves in the foot” at times.

They went into the interval 10-8 up, a two-point lead which could have been stretched to five if Finn Russell had not pushed his penalty attempt wide in the last action of the first 40.

Hogg said: “You could say the Springboks were dominant, but I’d probably disagree, I’d probably say we shot ourselves in the foot at times.

“We didn’t get to vital clear-outs, our set-piece didn’t function at times, we just didn’t control the game in the manner that we’d have liked to.

“Yes, we were put under pressure by them but at times we didn’t help ourselves.”

Hogg admitted his side were desperate to up the tempo against the Springboks and there was “method in the madness” as Russell put in several kick-passes, one of which helped set up Hogg’s first score.

“We got ourselves in good positions, we wanted method in the madness in the way that we were playing.

“We wanted to try and move South Africa around in a gameplan that they don’t want and wanted to keep high tempo into the game, keep this team moving around and show off the individual talents that we’ve got.

“At times we didn’t quite reload quick enough to be accurate and that killed us a little bit.”

Hogg now leads his side into their final Autumn Nations Series fixture at home to Japan next week, knowing a victory would cap a successful campaign for his side after victories over Tonga and Australia.