Legendary Scotland prop Tom Smith received a rousing reception from BT Murrayfield as he became the latest inductee into the Scottish Rugby Hall of Fame.

Smith was welcomed along with his family, wife Zoe, sons Angus and Teddy and daughter Amelie, for the induction ceremony after his place in Scottish Rugby’s Hall of Fame was confirmed.

An instrumental figure in Scotland’s 1999 Five Nations Championship success, Smith won 61 caps for Scotland during his illustrious playing career on the biggest stage.

He had only made his Scotland debut four months before the Tour – and had three international caps to his name – and was largely unheralded outside his native land at the time.

But Smith played a pivotal role both in scrummage and in loose play in a Lions pack that overcame the Springbok juggernaut and went on to post a historic series victory. 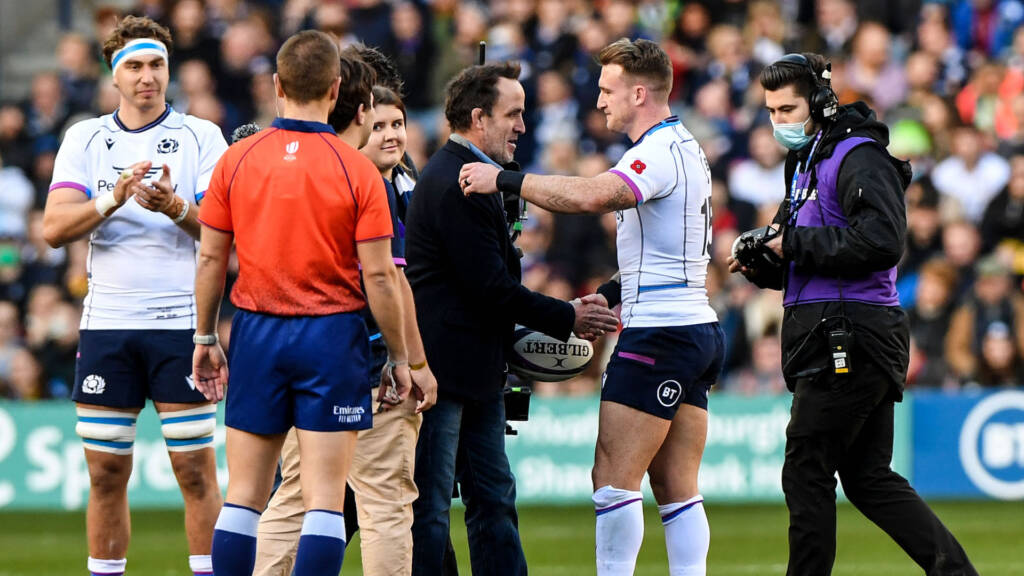 Sir Ian McGeechan, head coach on that 1997 Lions tour and a member of Scottish Rugby’s Hall of Fame Panel, said: “Tom is hugely deserving of this accolade.

“He was every inch the modern prop forward with sublime running and handling skills allied to the traditional strengths that are a pre-requisite for a front-row forward to flourish in the setpiece.

“For me he has been the greatest Scotland player of the professional era to date.”

After retiring, he coached at Edinburgh Rugby and in France before two years ago he had to focus on his own health, when he was diagnosed with colorectal cancer.

He has fought the condition as tenaciously as any contest on the rugby field, with support from all corners of the rugby world and from Scottish Rugby’s charity, the Murrayfield Injured Players Foundation.

He has also become an ambassador for the bowel cancer charity, 40tude, which raises funds to support leading-edge research that will help transform the treatment of colon cancer.

Smith said: “I feel surprised, humbled and honoured to be inducted in the Hall of Fame. Coming to Edinburgh to watch a new generation create their own legacy makes it more special.”

Scottish Rugby Board Chairman and Hall of Fame Panel chair, John Jeffrey, added: “Tom’s induction into the Hall of Fame is for resounding rugby reasons.

“But it’s also in keeping with our sports values that we salute the human being as well as the champion rugby player and send our very best wishes to Tom and his family.”