Ireland head coach Andy Farrell praised his side for the way they dealt with late selection drama to secure a record 53-7 victory over Argentina at the Aviva Stadium.

The men in emerald green scored seven tries to seal their third win from three in the Autumn Nations Series, after impressive victories against New Zealand and Japan.

But admitted the build-up was far from plain sailing as he was forced to make two changes before kick-off, bringing in Tadhg Beirne and Peter O’Mahony in for Iain Henderson and Jack Conan.

Farrell said: “We’re delighted with the win, the game actually didn’t start that well for us, it was a bit scrappy, I thought it was a bit fortunate with the scoreline at half-time.

“We dusted ourselves off well and were nice and composed in the second half, so I think most of all, today was about the group, there was a lot of controversy in and around the group, who was going to play, who wasn’t going to play.

“Last minute, Nick Timoney actually got a phone call at quarter to eight this morning, he came down from Belfast, so fair play to him.

“Tadhg Beirne was covering four positions, that’s the most pleasing thing, people got their opportunity today, they’ve taken them well you know, and we’ve certainly grown as a squad.” 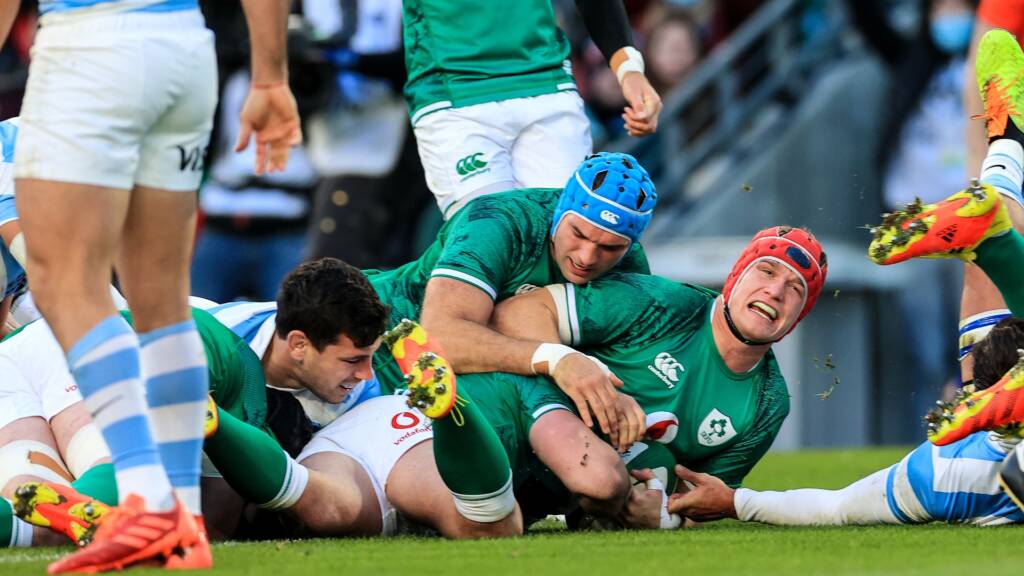 Mateo Carreras’ early try had put Ireland under pressure but they came through to turn it around with three tries before half-time to lead 24-7 before pulling away in the second half – much to the delight of Farrell.

He added: “That’s the most pleasing thing, it wasn’t perfect, a game never is, but we regrouped pretty well at half-time, and I thought we dominated the second half.

“Lads came on and added, I thought the bench were excellent tonight.”

It has been a perfect Autumn for Ireland in terms of results and performances but Farrell knows they are far from the finished product and encouraged his players to keep growing.

“It’s the world that we live in as we all know, we didn’t have much game time coming in as individual players that is, and we challenged them to get up to speed as soon as we possibly can, and I thought our first performance was excellent and we grew from there.”

“(We need to) keep learning our lessons, we keep wanting to improve and get better as a group and grow what we’re about.

“We also know we’ve not won a trophy in these three games, so dust ourselves off, the lads can go back to their clubs and we fight really hard to get back in the room for the Six Nations.”

That Six Nations is set to be spectacular, with Ireland joined by both England and France in going unbeaten this summer, something that Farrell was excited about.

“The Northern hemisphere teams have been fire haven’t they, fair play to them, I thought the England game, the France game and Wales getting the victory at the death there was fantastic to watch.”

Reading: 3 mins
Previous Story Jones: Our young guys will learn so much in a Test match like that
Next Story “It was a heck of an occasion” – Foster on All Blacks’ defeat in Paris