An emotional Johnny Sexton says he experienced a day he would never forget after marking his 100th Ireland cap in perfect style.

Playing in front of a packed Aviva Stadium crowd, Sexton celebrated bringing up a century by scoring a try and pulling the strings from No.10 in a dominant 60-5 triumph over Japan to give his side a perfect start to their Autumn Nations Series campaign.

During a post-match, pitchside interview – during which he was also presented with a ceremonial sword by Japanese RFU out of respect for his achievement – the 36-year-old fly-half had tears in his eyes at the rapturous reception he received from supporters and players, being noticeably choked up at the outpouring of love.

“It was an incredible day for myself and for my family – I think every one of them are here and most of them came up from Kerry as well,” said Sexton after regaining his composure.

“Just the reception I got, that try in the corner was one of the best moments of my career by far. I’ll never forget it.

“I feel a little bit guilty with there being no crowd over the last two years and guys like Cian Healy getting his 100th cap at an empty stadium.

“I had great friends like Rob Kearney and Fergus McFadden who retired in an empty stadium, so for me to get the chance to do this today, I do feel a little bit guilty but I will remember it forever so thank you so much to everybody.”

On the pitch, Sexton was at his brilliant best both from the kicking tee and in open play, where he had Ireland’s back-line humming with some scintillating open, running rugby more associated with the Brave Blossoms. 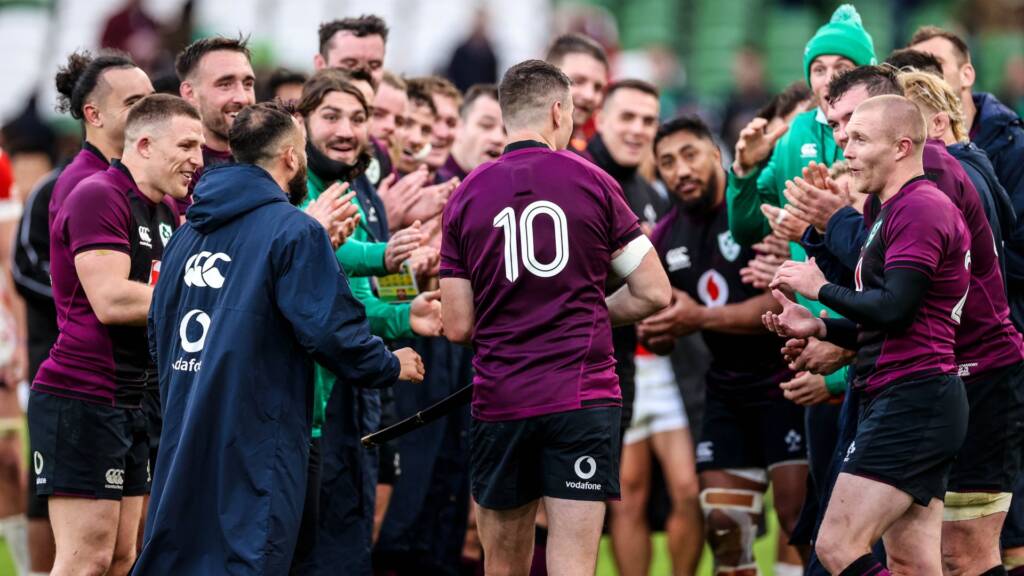 Early in the second half, the No.10 crossed for his 15th Ireland try as he barrelled over on crash ball from a lineout, while his side scored nine tries in total – including a hat-trick for Andrew Conway.

It was a serious marker laid down ahead of a mouth-watering clash with the All Blacks in Dublin next weekend and Sexton is already relishing the next Autumn Nations Series challenge.

“It was a good start but we know there is a bigger test ahead next week,” he added. “I know we’re going to have a full house here and I can’t wait for it now.

“The support was incredible today but I know it will go up a notch next week.

“I’m still loving it [playing for Ireland] – you need a little bit of luck to get to this age playing this game.

“I’m loving it at the moment and I want to thank my teammates for the week they put together for me – it was something I’ll never forget, so thank you very much.”

Reading: 3 mins
Previous Story Lawes enjoys captaincy at Twickenham
Next Story Kolisi reveals why South Africa are so effective at seeing out games