And so, the Autumn Nations Series draws to a close. A microcosm of international rugby’s most competitive season, Italy claimed a maiden victory over Australia, England were defeated by Argentina at Twickenham, and France finished 2022 unbeaten this calendar year – to pull just a few headlines from the action. Granting fans unprecedented access to the finest details of the game, the Smart Ball made its debut on the biggest stage courtesy of Sage, Insights Partner to the Series.

The clash of styles between northern and southern hemisphere rugby is always a central theme in the Autumn Nations Series. Southern hemisphere rugby is usually associated with pace and width, with the (perceived) tradition of their northern counterparts percentage rugby, driven by tactical kicking. The Smart Ball insights presented by Sage can reveal the truth behind these discrepancies in strategy, which shape the hierarchy of the international game.

One such insight is passing length. Ireland and New Zealand, both unbeaten in the Autumn Nations Series, are the two teams who had the shortest average passing distance: 6.04 metres and 6.16 metres respectively – demonstrating a convergence in the style of two of the world’s premier teams. However, both teams yield slightly different benefits from playing tighter to the breakdown.

New Zealand finished the ANS with a 97% success rate in terms of retaining the ball at the ruck. This is not only due to the accuracy of their breakdown work, but because of the ball-handling of their forwards. Excluding scrum-halves, All Black forwards made 43.2% of their team’s passes, moving the point of attack with shorter balls to try to mitigate threats to possession in more congested channels. 46.3% of New Zealand’s passes were on first or second phase, showing that their low average pass length is because they trust everyone in the team to be a ball player, getting lots of hands on the ball to dominate the tight channels.

As well as phase play though, the Smart Ball elucidates the technicalities of rugby’s magical moments too. A player no stranger to moments of brilliance, Finn Russell produced an incredible four try assists in Scotland’s victory over Argentina; only Paolo Garbisi can match this feat. Giving the last pass for Stuart Hogg’s 74th-minute try, Russell achieved a spin efficiency of 96.6%, allowing the ball to slice through the air at 71.8 miles per hour and put Hogg through the hole – incredibly precise handling which is a trademark of Russell’s game. The average speed of a spin pass was 22.1 mph across the whole ANS. However, the most precise pass of the Autumn Nations Series was thrown – somewhat predictably – by France’s Antoine Dupont, who achieved a remarkable 99.9% spin efficiency against South Africa. These subtleties of players’ games, which separate the greats from other international players, are tangible for the first time with the Smart Ball. 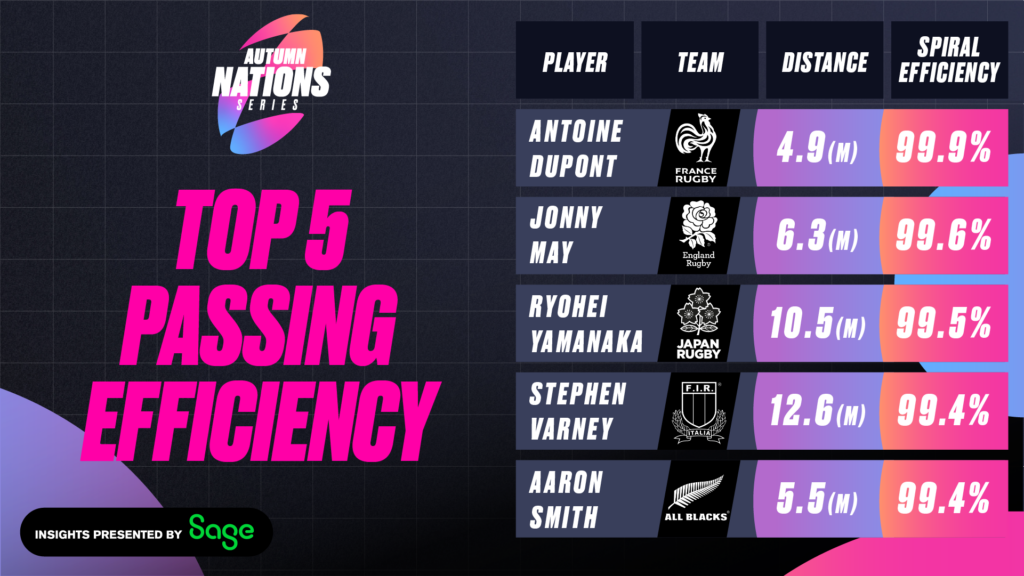 The kicking battle was also pivotal in a variety of the contests in the ANS, as we discussed in the context of England vs New Zealand for example. Despite coming unstuck against the Kiwis’ crossfield kicks, England were the most effective team at retaining possession from their kicks in play across the series – managing to do so 20 times in total. This is largely due to their willingness to box kick, which they did on more occasions than any other team (33). In fact, fellow home nations Scotland and Wales were also in the top four for this metric, testifying somewhat to the character of northern hemisphere teams. Using a machine learning algorithm on the Smart Ball data, fundamentally based on GPS technology, the style of a kick can be automatically interpreted. This system calculates that over one fifth of the kicks that were retained in the Autumn Nations’ Series were box kicks.

The average hang time of a retained box kick was 4 seconds across the series, moving 18.8 metres parallel to the touchline (pure territory gain) to allow a chasing player to compete. This makes the required pace to catch the ball, or apply pressure to a catcher, 10.5 mph for these successful kicks. However, whilst this is a relatively low risk approach – congestion in the area surrounding these aerial contests makes immediate line breaks from kicks unlikely – box kicks don’t afford the same attacking opportunities as chips, grubbers, and cross field alternatives. 76% of all box kicks in the Autumn Nations Series were kicked behind a team’s own 10 metre line due to the security of the box kick. However, of the 42 kicks in play made in this area that were retained, 32 were bombs, grubbers, or crossfield kicks – none were box kicks.

An often-underrated kicking skill is kicking for touch from a penalty. Particularly given the prevalence of the maul in modern rugby – 233 were set up in the ANS, making a total of 722 metres – metres or even centimetres more proximity to the opposition try line can be decisive. In this area, the northern hemisphere falls behind the standards of their rivals, with each of France, Ireland, and England in the bottom four sides for their average territory gain from a penalty touch for kick. France and Ireland evidently weren’t stung by this in the autumn but will want to ensure they can make the most of any and all opportunities that come their way. In contrast, it was Samoa’s D’Angelo Leuila who achieved the greatest territory gain with a single kick, belting one 49.5 metres down field to put Samoa in a strong attacking position. Skills such as these are those that will no longer go under the radar given the insights the Smart Ball is capable of intuiting. 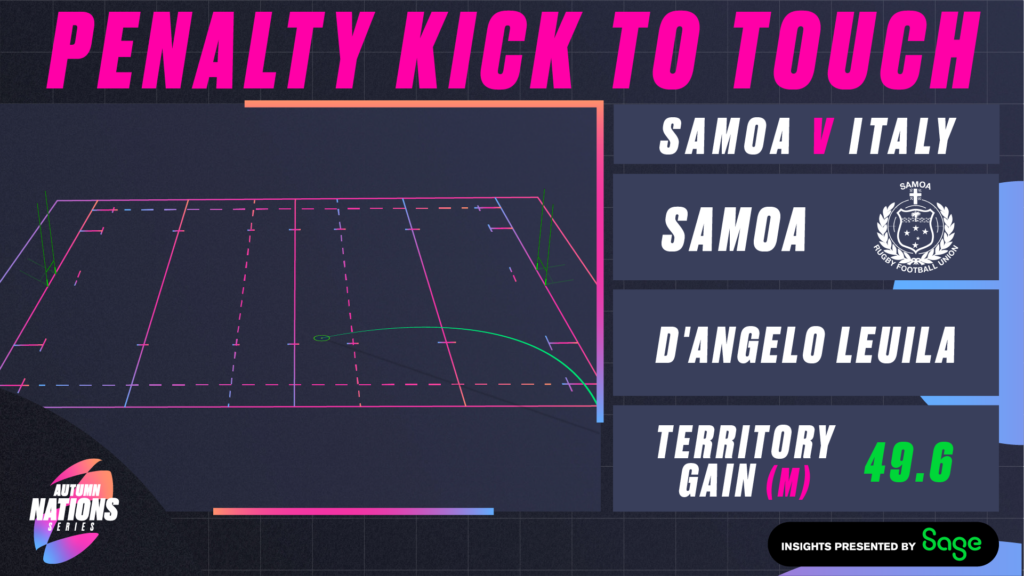 Moving forward into a World Cup year, points of identity in terms of phase play and answering the territory question will become increasingly pronounced and the world’s greatest rugby talents will be determined to push their skills to the highest possible standard. With the Smart Ball technology becoming ever more advanced, fanalysts’ strategic understanding of the game at the highest level will respond in kind.