The topsy-turvy landscape of international rugby has become only more unpredictable and thrilling throughout the Autumn Nations Series.

Reflective of this was the draw between England and New Zealand last weekend – only the second in test-match history and the first since 1997.

However, England’s chariot came forth to produce a huge momentum swing in the second half, notably with the replacement of recent Test initiate Jack van Poortvliet by veteran Ben Youngs.

The ‘Smart Ball’ technology, pioneered on the international stage in the ANS, can reveal some telling insights on how this tactical decision in the 54th minute changed the game.

Across the Series so far, van Poortvliet’s passing has been slightly punchier than Youngs’. The average spin rate of the youngster’s pass is 5.7 revolutions per second, with a release rating – how ‘neatly’ the ball spins on its axis – of 92.1%.

Whilst both the more experienced and junior members have similar average pass speeds of approximately 23.7 miles per hour, the zip of JVP’s pass has given him the edge on his Tigers teammate in this international window – despite New Zealand’s excellent video analysis rewarding them with a Dalton Papalii interception try at his expense. 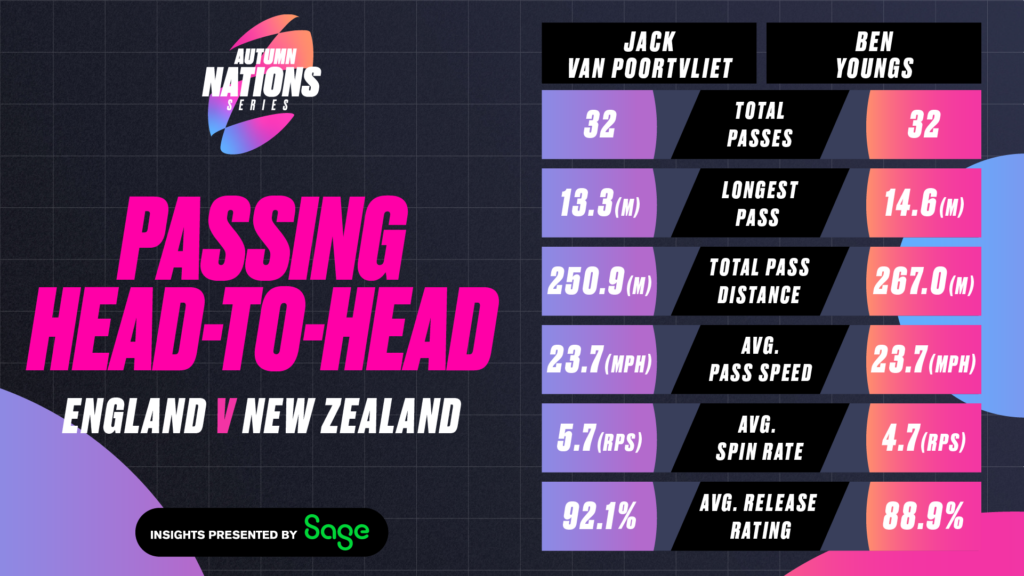 However, the injection of Youngs accelerated England’s attack at the weekend and inspired their comeback.

With van Poortvliet at the helm, the home team’s average ruck speed was 3.77 seconds, dropping to 3.44 after he was replaced.

Whilst this may not seem a huge difference, this can be contextualised by looking at the speed of ball produced by England when they sensed an opportunity.

In the build-up to Freddie Steward’s try, England’s second, there were seven rucks – the average speed of which was a lightning-fast 1.86 seconds, with none slower than 2.4 seconds.

This is as much to do with England’s strategy in this period of the match, when they were unrelenting in their pursuit of points, as it is to do with Youngs’ skill.

As a starter, van Poortvliet was sticking to the script and playing a more territory-focused game. Against New Zealand, he kicked three box kicks which were retained – as many as any player has managed in a single match during the Autumn Nations Series.

Across this international window as a whole, he has made more kicks which have been retained than any other player – a total of seven.

The Smart Ball reveals that his success in this area is because he can maintain a lengthy hang time on shallower kicks, averaging 3.96 seconds of airtime and 23.5 metres of pure forward progress (territory gain) per box kick.

However, the real kicking headline from this match was the cross-field assault on England’s backfield by New Zealand.

With one such effort granting the rugby world the opportunity to see Reiko Ioane in full flight (kick 4 in graphic), the All Blacks made five kicks laterally across the pitch, four of which were retained.

Using the tracking technology which locates the Smart Ball, we can see New Zealand’s confidence in this strategy and their ambition to attack from deep.

Four of their five kicks – excluding Jordie Barrett’s from a scrum – came from inside their own half, with each progressively further into their red zone.

The first of these was 5.6 metres behind halfway, the second 10.9, the third 23.4 and the final flourish, which led to Ioane’s try, was just 18.1 metres from the New Zealand try line.

This demonstrates the trust of New Zealand in their strategy exploit a frailty in the English backfield, repeatedly making similar kicks even when in potentially compromising field positions. 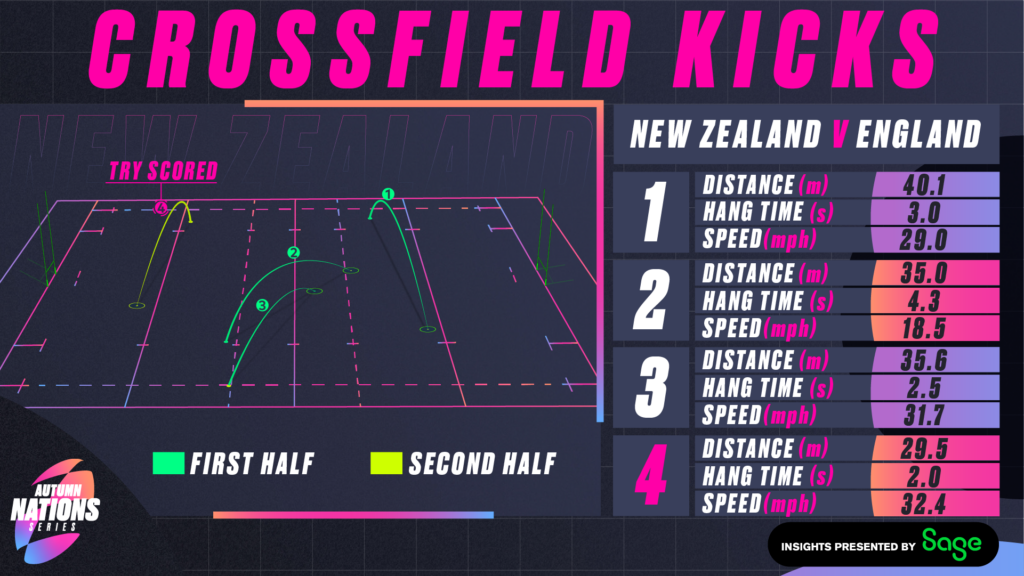 Trust alone though would not have allowed New Zealand to reap the rewards of their efforts as they did at the weekend.

The skill of the Kiwis as a unit, three different players made crossfield kicks which were retained (Mo’unga, B Barrett, J Barrett), is undeniable.

The crossfield kicks which were caught by friendly faces for the All Blacks averaged a 2.53 second hang time and 35.1 metre length as the crow flies. To have several players able put boot to ball to this level of precision, repeatedly, is extraordinary.

The chasers were also impressive: Caleb Clarke, for example, needed to travel at 6.1 metres per second to gather Mo’unga’s kick in the seventh minute.

Looking forward to their fixture against South Africa, England’s final opportunity to hit their rhythm in the Autumn Nations Series 2022, they must improve the organisation of their backfield.

The teams who’ve played against the men in white so far have made a variety of styles of kicks in play that have been retained: three box kicks, two chips, four cross-field, and two clearances.

Nine of these 11 defensive mishaps have happened between the tram and touchlines – the 15 metre channels which outline the length of the pitch.

It is in these wide channels where England must tighten up to give them an opportunity to topple the World Champions.

With world-class operators such as Freddie Steward, who has defused 15 of his 17 defensive catches, and the energy they showed in their second-half attack against New Zealand, who knows what Jones’ men are capable of.