The Autumn Nations Series produced some more excitement, drama and unexpected results and with Round 2 in the books it is time to check in on the Power Rankings.

Our top three were all victorious this week, but has that seen a shake-up?

And what about the middle of the pack where everyone seems to be capable of beating everyone else?

England and Wales bounced back from defeats, Italy made history and Scotland fell just short of doing the same.

Down at the bottom, there is also plenty of movement, so let’s dig in to the Power Rankings after Round 2.

Andy Farrell was not overly impressed by the performance, but another win while giving game time to a host of players should not be sniffed at.

The defence against Fiji was not always flawless, and that will need to be better against Australia, but Ireland just keep on winning. They are still ranked number one in the world, and will remain there provided they do not lose to Australia.

There will certainly not be any question of looking past the Wallabies, but the mouth is already starting to water at the prospect of the Guinness Six Nations Round 2 clash with France in Dublin!

At one point France looked like they were going to romp past 14-man South Africa in Marseille. Then, the Springboks fought back to a point that they looked like they might run away with it.

In the end, it was an impressive final quarter of an hour from France, who seized the momentum and came away with the victory. 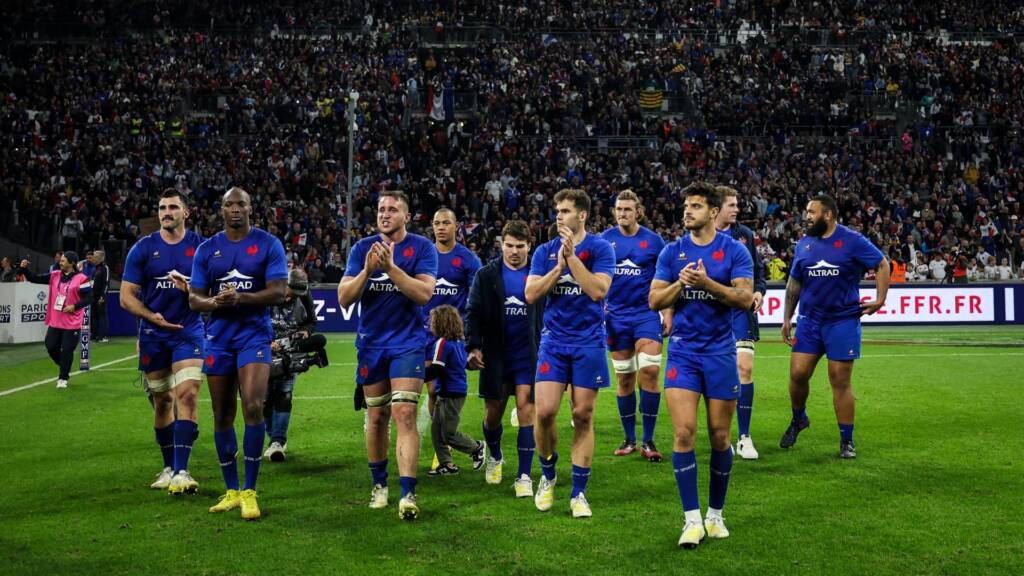 They have not been at their best so far in the Autumn Nations Series, and yet that is now 12 wins in a row, knocking off every other side in the world’s top ten in the process.

Next up are Japan, and the chance to complete an undefeated calendar year in Toulouse.

An inability to hold onto a lead will be concerning for the All Blacks. After Australia in Melbourne, then Japan and Wales, this time it was Scotland who were able to dig themselves out of a hole.

In fact, this was more than just a fightback. From 14-0, the home side scored 23 unanswered points and but for some desperate Kiwi defence on their own line, the game could have been done and dusted.

How to mark your debut for the @AllBlacks …

Still, Mark Telea looked very impressive on debut, Samisoni Taukei’aho continued his try-scoring record, and the All Blacks have now won six in a row.

England to finish the year will be a great litmus test for where they truly stand but we will slot them in at three for now.

Still winless in the Autumn Nations Series and yet it would not feel right to drop South Africa down the rankings.

When Pieter-Steph du Toit was sent off and they trailed 13-0, they could easily have folded, but this Springbok team are made of sterner stuff.

The sheer level of physicality was mind-blowing at times, and they had France on the ropes after Les Bleus lost Antoine Dupont.

That they could not complete the job will be disappointing, but a week on from their goal-kicking costing them a possible win in Dublin, the combination of Cheslin Kolbe, Faf de Klerk and Damian Willemse went six from six including some very difficult shots.

Next up are Italy, and a defeat in Genoa would mean a tumble down these rankings, but South Africa look like a very good side in spite of their results.

How much should we read into the win over Japan?

Well, the Brave Blossoms were certainly off their best at Twickenham, but the way England punished them time and again made for very welcome viewing after the struggles against Argentina a week earlier. 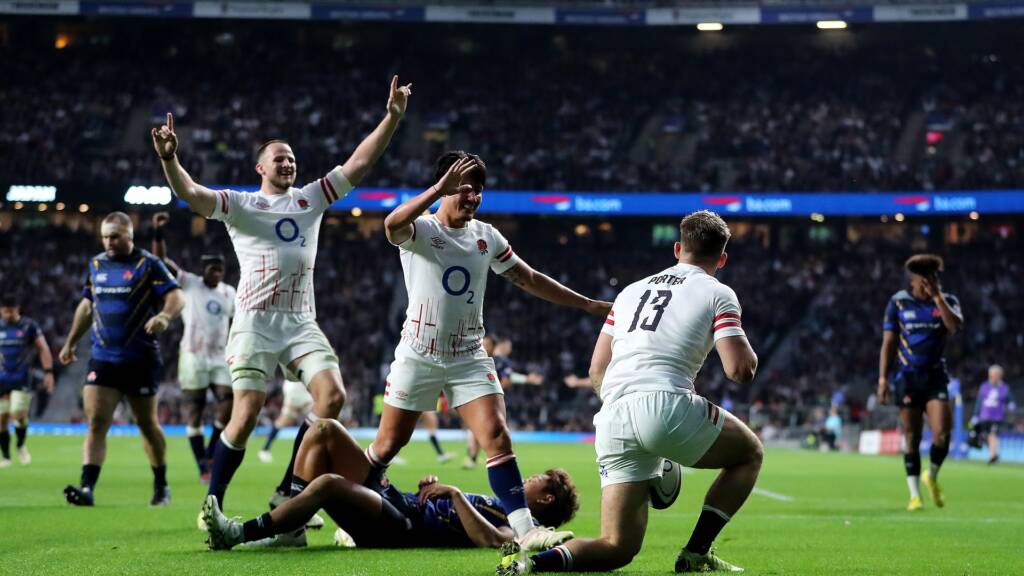 Eddie Jones’ team still have two huge tests to come with New Zealand and South Africa in town, which could see them shoot up these Power Rankings with a couple of wins.

For now, it is a case of wait and see.

Another win, another rise up the Power Rankings for Italy.

Sure, that was not the same Australia team that came within a point of downing France, but while Italy needed Ben Donaldson to miss a late conversion to record an historic success, they were well worth that win.

Consider that they lost Paolo Garbisi, perhaps their most accomplished player, to injury in the warm-up, and also missed 14 points from the kicking tee.

That would sink many a side, but this Italy team are definitely building something and Ange Capuozzo continued to build a case for being the most exciting prospect in the game – no wonder he was nominated for Breakthrough Player of the Year.

A win over the Springboks would complete a perfect Autumn Nations Series, but even if the Azzurri cannot repeat their 2016 heroics, this has been a successful campaign.

A rise of three places is probably more a reflection on the teams around them than a ringing endorsement of Wales’ win over Argentina.

Beating Los Pumas was vital and while there were a few nervy moments late on, it was a thoroughly professional performance.

The key now is to back it up against Georgia, with a few new faces brought into the fold against the Lelos, before Australia in Cardiff to close out the Autumn Nations Series.

Dave Rennie was always taking a chance in making so many changes for the trip to Italy, and that gamble did not pay off.

The question is how much did he learn about the players who were included given how little opportunity they have had to play together.

Will Skelton enhanced his reputation, he was comfortably the most impactful forward, but the backs lacked fluency.

It does not get any easier with a trip to Dublin next up. Some of the big guns will return, but will that be enough to avoid three straight losses?

A week on from that stunning win at Twickenham, Argentina could not back it up in Cardiff.

Given the favourites tag, it was a reminder that while Argentina can beat pretty much anybody on their day, they are still not consistent enough to rank among the world’s very best.

On a day where they dominated the penalty count, it was a chargedown try from Tomos Williams that effectively turned a close game, leaving Argentina to chase the game.

Scotland will provide a stern test this week, and a chance for Argentina to make amends for Saturday.

It feels a little harsh to drop Scotland two places after arguably their best performance of the Autumn Nations Series.

Finn Russell looked great on his return to the side, Stuart Hogg was back to his best and Darcy Graham is one of the in-form wingers in world rugby.

And yet, this is a game they absolutely could have won. Not only did they lead by two scores midway through the second half, they also threw away multiple opportunities close to the line to build an even bigger advantage.

Had they done that, they might even have been pushing for the top four on these rankings. As it is, they have taken a slight fall down.

A week on from a heavy defeat in Italy, Samoa were much-improved in snatching a late win over Georgia in Tbilisi.

We probably should not have been surprised that they would benefit from more time together, if cohesion is the watchword in global rugby right now, then Samoa are playing at a disadvantage with much less chance to gel than some of their opponents.

This victory will do them a lot of good and with Romania next up, there is a chance for Seilala Mapusua’s side to finish a November campaign strongly after a disastrous start.

A frustrating afternoon for Georgia, who battled hard but came out on the wrong side of a 20-19 defeat to Samoa that sees them drop a spot.

That was a game they would have been targeting for a win, and defeat leaves this as a slightly disappointing November campaign so far.

Now comes a trip to Cardiff to take on Wales. The expectations are not that high, but it will be important for the Lelos to be competitive with Wayne Pivac’s team. The last meeting saw Wales come out on top 18-0, the objective has to be an improvement on that.

A second successive defeat to a tricky opponent. Fiji had their moments against Ireland without really ever threatening an upset.

WATCH!!!
The TWO tries we scored against 🇮🇪. #duavataveilomanirakavi. pic.twitter.com/gdmgrwjyPk

Discipline was an issue again. It is hard enough beating the best teams with 15 on the park. When you spend extended time with 14, it is nigh on impossible.

Fiji finish their campaign against the French Barbarians, hoping for a first win. There is no lack of talent, particularly in the three-quarters, but there is a sense that they have taken a step back over their first two matches.

If the narrow loss to New Zealand was a confidence booster, shipping 50 points at Twickenham was a big step backwards.

Hopes of an upset for the Brave Blossoms were probably always a little optimistic, but they were never really in this one.

Compare to the meeting four years ago, and this was an underwhelming display that raises a few questions.

Now comes a trip to Toulouse to take on a France team who have won 12 in a row. Jamie Joseph has some work to do to make sure his team produce a much-improved performance.