Drama, tries, cards and a lot more – Round 2 of the Autumn Nations Series had it all.

Italy made history in Florence with victory over Australia, France made it 12 in a row by downing South Africa and New Zealand came from behind to deny Scotland a landmark success.

So what were the big takeaways from the weekend?

In the first two years of Fabien Galthié’s time in charge of France, the biggest criticism that could be levelled at them was their game management in the final stages of matches.

Of their six defeats under Galthié in those first two seasons, only the 2020 loss in Scotland came in a match where France did not either lead or were level in the final five minutes.

On their current 12-match winning streak, France appear to have solved that problem, with comeback wins against both Australia and now South Africa, closing out the games once they had taken the lead.

It has become a hallmark of the team, combining their watertight defence with an ability to earn crucial turnovers to seal victories.

It does not mean that the team is perfect. There were certainly some frailties on show from France in a game in which they led 13-0 before seeing the 14-man Springbok team fight back.

Their attack has not quite clicked in the Autumn Nations Series and South Africa were able to put them under pressure with their rolling maul and their physicality on the gain line.

Despite that, though, and with Dupont sent off and key players like Grégory Alldritt, Cyril Baille and Julien Marchand off in the final 20 minutes, France were able to turn the game around and pull out the victory. It said a lot about the character of the team.

Italy’s slick backs make them a threat to anyone

There is a common misconception in rugby that passing and catching while running at full speed is a basic skill.

That stick is then used to beat international players if ever they cannot finish off moves.

The fact is, the game is played at such speed that getting those passes to stick and having multiple players timing their runs to perfection is not easy. And when it is done well, it is spectacular.

That was certainly the case for Italy against Australia, particularly on the two tries scored by Ange Capuozzo.

Every time a player moved the ball, his teammate received it in stride, with each man straightening before making the pass.

The defence just had no chance to catch up, and it was a big reason why Italy were able to make history against the Wallabies.

Bear in mind, they did all that without their first-choice fly-half Paolo Garbisi, perhaps their best player, who dropped out before kick-off.

With the age of this team, the margin for improvement is huge, and we have already seen them take huge strides in the Autumn Nations Series.

An opening defeat to Argentina left England with some soul-searching to do but they answered any doubts with a convincing 52-13 win over Japan.

Questions around complacency were swiftly put to bed in a swashbuckling first half and desperate to atone for a flat display against Los Pumas, England’s backs cut loose in the second.

It will be hard to drop Van Poortvliet now after the 21-year-old provided consistently sharp and snappy service, while Freddie Steward was electric from full-back.

We are still waiting to find out exactly how dangerous England’s midfield can be with Manu Tuilagi outside Smith and Farrell, but against Japan, Guy Porter showed that he is a viable option if required.

And for all of England’s devastating play in the backs, Ellis Genge was instrumental in building a platform for the backline to deliver.

Even if there are far more challenging battles to come, this clinical showing was exactly the tonic Eddie Jones and his charges needed.

Eyebrows were understandably raised when Wayne Pivac announced Louis Rees-Zammit would start at full-back in Saturday’s crucial game against Argentina.

After all, the 21-year-old had barely played any senior rugby at No.15, let alone in the cut-throat environment of a Test match against the world’s number six-ranked team.

However, Rees-Zammit quickly dispelled any doubts in a mature performance that proved it does not really matter where he plays – just as long as he does.

A year from the World Cup, changing his role seems risky. But playing at full-back offers Rees-Zammit more of the ball and for Wales, that can only be a good thing. We have seen South Africa try similar with Cheslin Kolbe. When you have game breakers, it is all about getting them the chance to shine.

Indeed, Argentina got a taste of what was to come in the first minute. Receiving a deep kick inside his own half, Rees-Zammit opted against kicking it back and instead put his foot to the floor, galloped 30 metres upfield and darted through a gap in the Los Pumas defence.

Argentina’s cards were officially marked and Rees-Zammit went on to have a very assured performance in a Test match Wales so badly needed to win.

In the long run, the smart money is on one of Leigh Halfpenny or Liam Williams re-establishing themselves at Pivac’s full-back of choice when fit but, with their recent injury issues, Wales need a long-term solution.

Whether Rees-Zammit’s defensive game, an area that contributed to him being dropped during the Guinness Six Nations, has improved sufficiently is tough to answer. But as he showed against Argentina, the upside might just be worth it.

“I can play there, and I will play there if needed,” he said. “I am a winger, but I can play there as well. I’ll play wherever they pick me. So long as I can help the team, whether that’s in attack or defence, I’ll try my best.”

Russell remains a class above

Although they missed their best-ever chance to beat New Zealand, the return of Finn Russell was as smooth as Scotland could have possibly hoped for.

The mercurial fly-half, left out of their initial Autumn Nations Series squad, had the All Blacks dancing to his tune in a 50-minute spell that saw the hosts score 23 unanswered points after falling 14-0 behind.

Adam Hastings and Blair Kinghorn have the potential to be Test-calibre No.10s but Russell’s performance was a reminder of just how good he is and how good Scotland can be.

The delayed passes, the clever kicks, the cute running lines. It was Russell at his best and the All Blacks struggled to contain him and his game lifted that of his partner in crime, full-back Stuart Hogg. 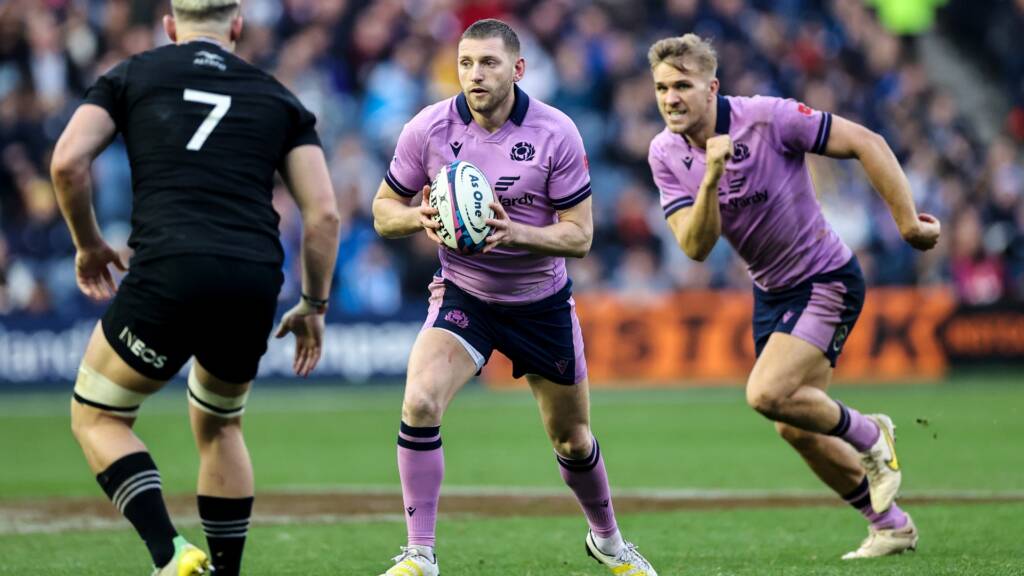 Had the hosts not squandered three excellent field positions inside the All Blacks five-metre line by conceding two penalties and knocking on once, they surely would have won comfortably.

But after an uninspiring defeat to Australia and stodgy win against Fiji, Scotland’s Autumn Nations Series campaign has been re-invigorated. Russell was only one part of the reason why, but a substantial one nonetheless.

Fijian discipline letting them down

Fiji were a delight to watch once again in their 35-17 defeat against Ireland at Aviva Stadium, but lack of discipline is really starting to cost them.

Albert Tuisue was sent off while Manasa Saulo and Api Ratuniyarawa both saw yellow cards in their game against Andy Farrell’s team.

Vern Cotter’s side were reduced to 13 at one point and also had to contend with being down to 14 in their game against Scotland in Round 1.

South Africa showed in Marseille that being down a man does not necessarily mean you cannot compete with your opponent, but it is a significant handicap.

For Fiji, who have shown their trademark threat with ball in hand during this Autumn Nations Series, it will be tough to compete with the best sides unless they can solve their discipline issues.

They had a similar problem a year ago, losing to Wales in Cardiff when Eroni Sau was sent off in the first half of a match they still managed to dominate for long periods.

For Cotter and his coaching staff, there is one obvious area where they can make huge strides with this team.

Reading: 4 mins
Previous Story Farrell disappointed by Ireland display despite Fiji win
Next Story Vote for the Autumn Nations Series Player of Round 2