With the ‘fine margins’ often associated with Test rugby becoming ever slighter, the introduction of the Smart Ball and the insights that are presented by Sage, allows fans and analysts alike, rarely mutually exclusive tags, to probe the nuances of rugby at the top level to an unforeseen extent.

Using a network of in-ground sensors, the Smart Ball technology calculates the position of the ball to centimetre-level precision twenty times per second.

Harvesting this quantity of data then allows an automated system to calculate the most minute details of the ball’s movement – yielding unprecedented analytical access to the game.

So how did Argentina dominate the kicking battle against England?

An area in which the Smart Ball provides particularly strong insight is the kicking battle, illuminating how Argentina’s game off the boot allowed them to claim a famous victory at Twickenham – their first since 2006, ending an eight-match losing streak against England.

In every area, bar a marginally lower average hang time than England, Los Pumas dominated the contest from the boot.

Average kick territory, a new datapoint made possible by the Smart Ball, can be especially indicative of how effectively a team kicks.

When a ball is kicked, the territory gained is the distance that the ball travels parallel to the touchline whilst it is still in play – in other words, the pure forwards and backwards outcome of a kick. 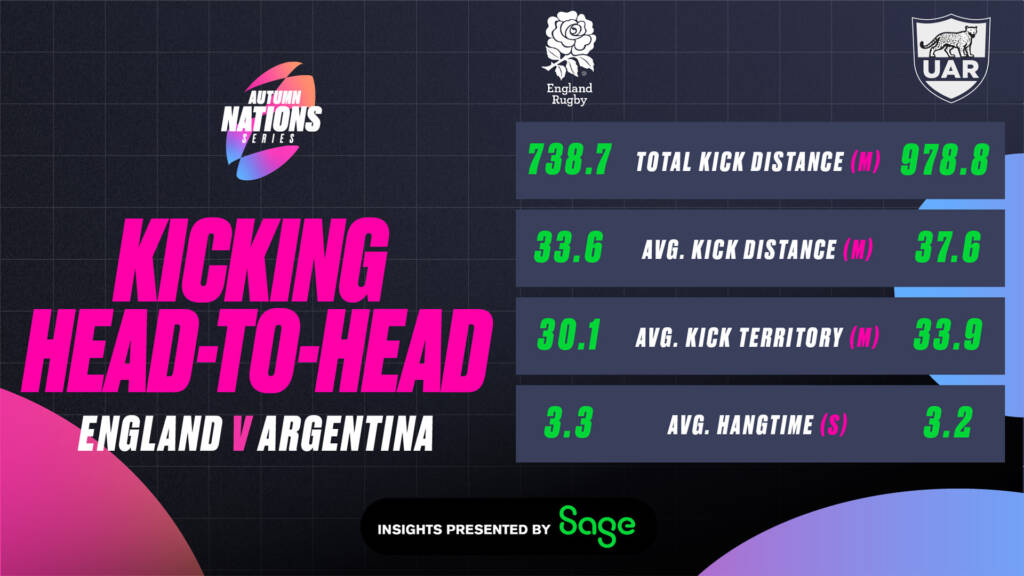 By beating England in this area, particularly in conditions which weren’t necessarily suited to running rugby, Argentina built pressure on their opponents by keeping them a safe distance from their red zone for large periods of the game.

Santiago Carreras was the heartbeat of the Argentine territorial strategy. Los Pumas kicked the ball in play a total of 26 times, of which Carreras booted 14 – clearly the focal point of their kicking game.

Why, unlike England (a quarter of whose kicks were box kicks), did Argentina so decidedly choose to kick from fly-half?

Realising the growing importance of field position as the match unfolded, Argentina realised that kicking from first receiver rather than the base of the ruck would allow them to kick deeper and more effectively vary their ‘line and length’, to borrow the cricketing terminology.

Box kicks necessitate a steep trajectory to be successful, mainly to get over the head of the various 6’ 8” monsters who are now littered across elite-level rugby.

This angle of ascent means box kicks have long hang times and travel short distances, making them ideal targets to be recovered by teammates.

For example, Gonzalo Betranou’s box kicks last weekend had an average hang time of 3.8 seconds – well above the team average of 3.2. Therefore, in the main, box kicks tend to be better agents of ball retention and incremental territorial gains than real changes in field position, despite the advantage given by playing right on the gainline.

Enter Carreras. Where the average length of an Argentinian box kick was 29.3 metres, the kicks in play made by the fly half travelled an average distance of 43.65 metres, the longest of which travelled 55 metres and made a huge 53.5 metre territory gain.

Whilst this strategy didn’t lend itself to ball retention, it meant that England were kept at arm’s length from any real scoring opportunities in the second half. Happy to play without the ball and let the home side make mistakes, Argentina had just 38.1% possession during the match, and attacked for a total of 9 minutes and 24 seconds to England’s 16:42. 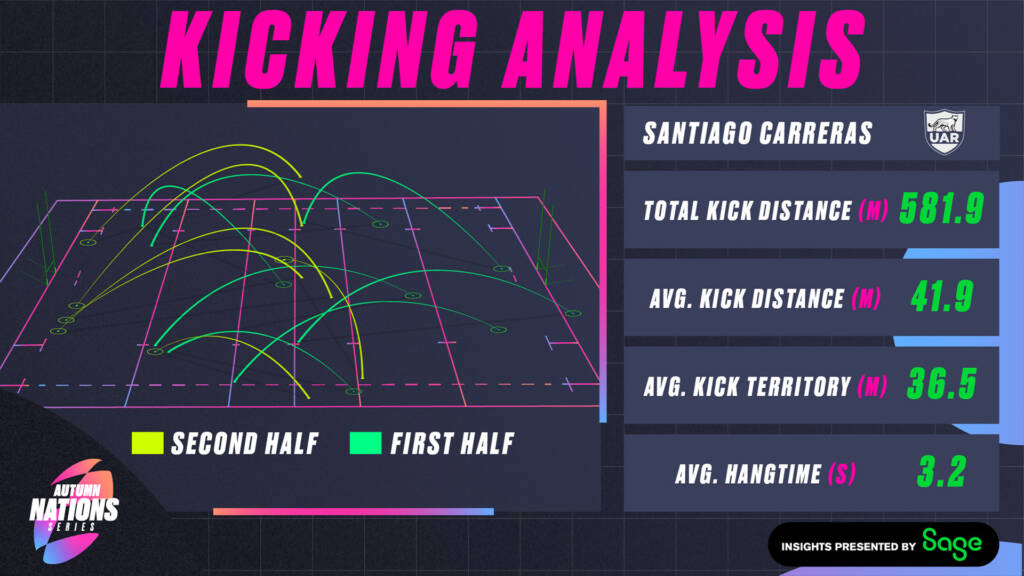 Los Pumas’ kicking game also benefited from the increased flexibility of a kick from 10. Aiming for space in the backfield, Carreras varied his kicking by aiming seven of his clearance kicks left and five of them right.

It’s not just the kicking game that effects the outcome…

As well as the more structural features of the game, the Smart Ball elucidates the key features of international rugby’s most outstanding attacking plays.

The lynchpin of Italy’s impressive attacking performance against Samoa, Paolo Garbisi made four try assists last weekend – the most that any player managed in this round of ANS fixtures.

The two most impressive messages from the Smart Ball about Garbisi’s assists are his ability to play the ball very close to the gainline and the variety of his skillset.

The Smart Ball has the ability to measure ‘reload time’, which is the time between the ball reaching a player’s hands and them playing the ball with a pass or kick.

The variation of this measure allows us to quantify how playmakers choose to play when they attack the advantage line for instance. Garbisi’s first try assist, for Nacho Brex’s score in the 22nd minute, was a delayed short pass.

The 22-year-old stand-off hesitated on the ball to fully commit an oncoming defender, before releasing his teammate through a newly opened gap.

The delay on this pass meant that Garbisi’s reload time on this 2.6 metre pass was 1.4 seconds – higher than his other contributions due to the way he skilfully manipulated the Samoan defence.

For Monty Ioane’s try on the cusp of half time, Garbisi threw a 24.6 metre pass, the second-longest in the match, to beat the Samoan defence for width.

His reload time on this occasion was just 0.8 seconds, demonstrating the speed with which Italy’s prodigal fly-half identified the space and executed this skill.

Able to take the ball to the line and use short runners, able to move the ball quickly wide to exploit space, Garbisi also demonstrated his attacking kicking threat at the weekend.

Threading one through for Pierre Bruno, Italy’s 10 put that ball on the toe just 0.7 seconds after receiving it himself, simultaneously challenging the defensive line and assessing his most threatening option before putting boot to ball.

All ways round, in an unparalleled period of competitiveness in international rugby, the introduction of the Smart Ball brings all spectators that bit closer to the split-second decisions and overarching strategy used at rugby’s highest level.