Ireland are still on top, France keep winning and Argentina spring a surprise – it was a thrilling Round 1 of the Autumn Nations Series.

We have now seen 12 teams in action, with four wins for the northern hemisphere teams and three for the south – if you include last week’s Australia triumph in Scotland.

But what are the key takeaways from Round 1?

He might have played down the significance of Saturday’s win but not even Andy Farrell can deny something special is happening across the Irish Sea.

It might be three years since South Africa won the World Cup but they are still one of the premier teams in world rugby and to beat them in Dublin is another major milestone in Ireland’s exciting development.

Watching Ireland was like the Springboks at their peak, intense, physical, mature, composed and a knack for when to put their foot on the throttle.

Ireland were outplayed in the first half but tight enough in defence to prevent any lasting damage and smart enough to know that the time to attack was straight from kick-off in the second half.

Johnny Sexton’s call to go for the corner instead of the posts with a penalty deep inside Springboks territory was a bold one but Ireland, their lineout drilled so brilliantly by coach Paul O’Connell, struck through Josh van der Flier, while Mack Hansen’s try shortly after was a counter-attacking masterclass.

For a game with so many laws and technicalities, rugby is a simple sport at its core and mastering the basics takes teams a long way. Ireland have done that – now it’s about how far they can go in a 12-month spell that brings a Guinness Six Nations and World Cup.

A win is a win but Scotland need to show more

After last week’s one-point defeat to Australia, Scotland were expected to grab the bull by the horns and take their frustration out on an undercooked Fiji.

While a win is a win, their 28-12 success at BT Murrayfield did not fit that description. Scotland struggled in a lethargic first half, conceding 66% territory to their visitors and seven penalties, while they were bullied at the breakdown in particular.

Adam Hastings’ well-taken try on the stroke of half-time cut the tension and two further tries after the break from Duhan van der Merwe and Ben White cemented victory, but this Scotland team could certainly do with a spark – and quick.

New Zealand make the trip to BT Murrayfield on Saturday, fresh from scoring 55 points against Wales, and with their troubles from early summer seemingly a thing of the past.

Finn Russell joins the Scotland squad with Adam Hastings returning to his club. George Turner remains with the team as preparations continue for Sunday’s game against New Zealand.#AsOne pic.twitter.com/1pbyykIOKe

Finn Russell’s recall will be popular but head coach Gregor Townsend seems less keen than Scotland supporters, despite his masterclass cameo for Racing on Saturday night, while full-back Stuart Hogg is still adjusting to life without the captain’s armband, and Jamie Ritchie to life with it.

We know which New Zealand is going to show up on Saturday – but which Scotland is anyone’s guess.

Italy went into Saturday’s clash with Samoa without the two men who inspired March’s historic victory over Wales.

Ange Capuozzo was the architect of the match-winning try scored by Edoardo Padovani, and he hit the ground running after a summer mover to Toulouse.

So when he was ruled out of the encounter against Samoa, along with Padovani, there must have been some trepidation at what Italy’s attack would do.

Paolo Garbisi is exceptional, but the fly-half needs game breakers around him and was going into the game without maybe the most exciting of all.

And yet, Capuozzo’s absence was barely felt as Italy romped to a 49-17 win over Samoa, who, lest we forget, won the Pacific Nations Cup earlier this year.

Kieran Crowley’s side were in complete control for much of their first half in their opening Autumn Nations Series game, leading 28-0 at the break thanks to tries from Juan Ignacio Brex, Pierre Bruno and Monty Ioane.

Ioane and Bruno were particularly impressive throughout, highlighting once again how dangerous Italy are from either wing ahead of a crucial set of fixtures.

It is not yet known when Capuozzo and Padovani will return, but the win over Samoa showed that Italy are certainly not lacking for depth in the back three.

Savea does it all over and over for the All Blacks

This time a year ago in Cardiff, Ardie Savea reminded everyone of just how good a player he is. Since then, he has not looked back and on his return to Principality Stadium, he underlined his status as a contender for World Rugby’s Men’s Player of the Year.

Special night. I love playing at this stadium my fav bye far in world rugby 🏟

Former Wales skipper Sam Warburton certainly believes he should win it, and while there is plenty of rugby still to be played, he deserves to be in the conversation at the very least. He might play No.8 these days, but Savea’s jackalling was worthy of the great All Black No.7s of old, starting in just the second minute and slowing down Wales ball all afternoon.

If it were just his breakdown ability, Savea would be a top-class international, but he brings so much more. In the first half, every time he carried, he shrugged off Wales defenders as New Zealand dominated the physical battle.

The dummy might still need a little more subtlety, even if it worked this time around on Nicky Smith. When you are as good as Savea, it seems that everything comes off. 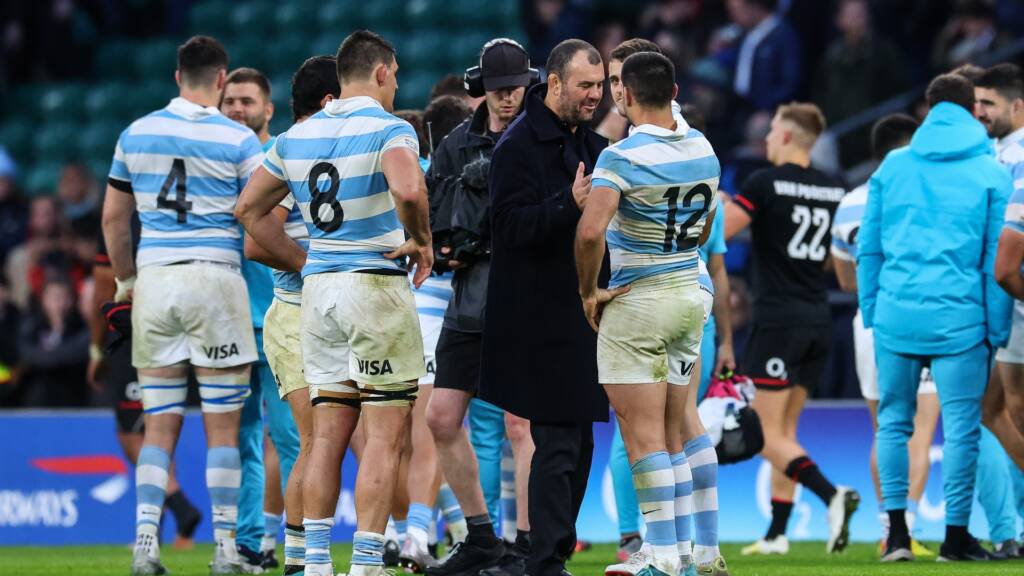 You had to go all the way back to 2015 for Michael Cheika’s last win at Twickenham, with the now-Argentina coach having lost every prior meeting with Eddie Jones during his time as Wallabies coach.

The last of those was Cheika’s last game in charge of Australia, at the 2019 World Cup, when England were able to punish the Wallabies’ reluctance to kick the ball and to run at all costs.

Whether it is a case of a coach evolving, or simply Cheika adapting to a new set of players, there was a very different mindset from his Argentina team.

As noted by Russ Petty on Twitter, this was the first time ever that a Cheika side had out-kicked England under Jones.

Perhaps that is tied to the conditions but it is an indication of what this Argentina side can do, even with a fly-half in Santiago Carreras, who started life on the wing and is not naturally inclined to put boot to ball.

What Argentina do have, is a lot of different kicking options, and in Emiliano Boffelli, one of the very best goal-kickers in the world.

In a match where they spent barely a quarter of the game in England’s half, Argentina still managed to put up 30 points, and earned Cheika a first win over Jones at international level.

France shake off rust but need to step it up

It did not come as a huge surprise, but France did not look at their slick best against Australia, with Fabien Galthié having chosen to select a few players who were short of game-time in his starting line-up.

Romain Ntamack had not played since early September, while Cyril Baille’s replacement appearance for Toulouse last week was his only outing so far this campaign.

Barring an early scrum penalty conceded, Baille was remarkably good considering, but Ntamack looked like he was still finding his feet, which put more pressure on Antoine Dupont and Thomas Ramos to pick up the playmaking and kicking slack.

Dupont admitted that his own play was not at his usual high standards, with one kick out on the full, as well as being scragged at a couple of breakdowns. Typically for Dupont, even in a so-called off game, he still made a decisive intervention ahead of Julien Marchand’s try and somehow handed off Michael Hooper when the former Wallaby skipper had him lined up for a huge tackle.

Still, overall, France found life tough, and needed some magic from Damian Penaud to escape with a 30-29 victory – a record 11th in a row.

Injury doubts around Romain Taofifenua are of particular concern. With no Paul Willemse, Taofifenua is the ballast France would usually call upon in the second row. If he cannot play, they may stick with the Thibaud Flament-Cameron Woki pairing that feels undersized against the power of the Springboks.

The alternative is to hand a debut to Rémi Picquette or Bastien Chalureau. Either option is not ideal with the world champions in town.

But if Ntamack, Baille and co are better for another match in their legs, France might just cope regardless.