Viral mural painter Tee2 Sugars is a founding member of the inaugural Autumn Nations Series Supporters Club after re-discovering his passion for painting during lockdown.

A lover of Welsh rugby and of painting, it is no surprise that a lot of his murals have centred around key Welsh rugby moments, while his most viral video came during the lockdown period, with a poignant painting of a soldier with a nurse.

He is hoping that, with his involvement with the Autumn Nations Series and on TikTok, he will be able to inspire more people to go for it with their passions, as well as getting as many new people into Welsh rugby as possible.

He said: “It started 14 years ago when I was 18, but it went on the backburner, it was a little bit of a side hustle kind of thing, and I had other jobs and stuff in between.

“Then lockdown happened, and I took up painting again, it has just become a full-fledged thing and I started posting a lot more on social media.

“There was obviously a lot of bad that came out of lockdown, but that was a real positive for myself being able to do what I want and turn it into a full-time job.

“I want to meet as many people as I possibly can that get inspired by my story really, I put stuff on YouTube as well which is a bit more longer platform stuff.

“I talk about the ins and outs really and how to start up a business with something that you love, and I am hoping to inspire as many people as I possibly can to inspire people to do what they love doing.”

The artist, who goes by the name of Tee, is an avid follower of Welsh rugby and is a very patriotic Welshman, so for him to be involved in the Autumn Nations Series Supporters Club is a real honour, and something he is hopeful can help the Welsh team in any way possible.

The Autumn Nations Series Supporters Club sees a group of talented young content creators showcase their talents to add a new and unique flavour to matches.

Coming from each of the host cities in Europe – Paris, London, Cardiff, Edinburgh, Rome and Dublin, they will act as ambassadors for the game in their respective countries, welcoming travelling rivals and acting as catalysts for the colourful originality that erupts across the towns, cities and countries hosting Autumn Nations Series games. 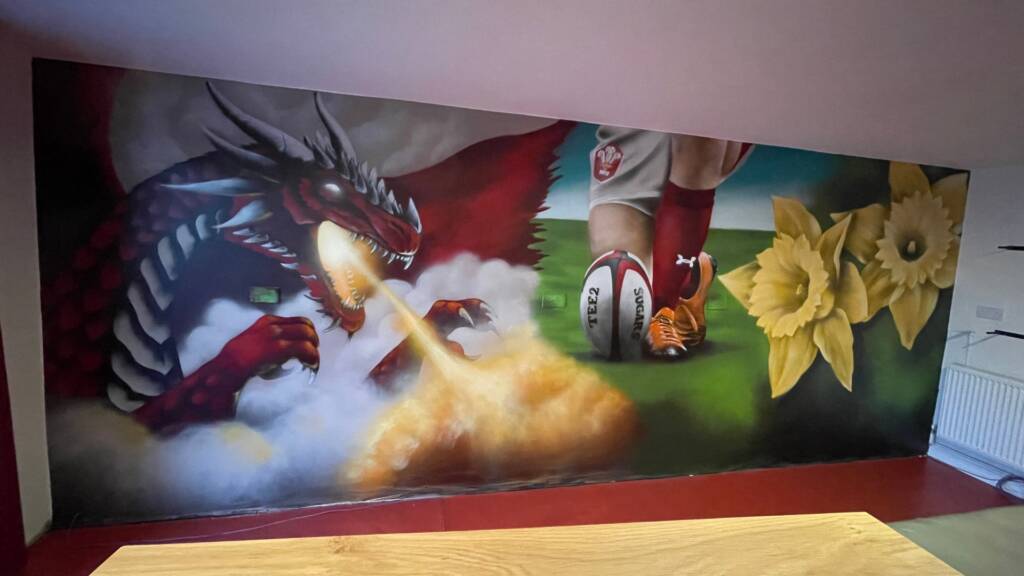 “I have played rugby since I was 15 years old, and went into senior team and stuff, sadly I have had a few bumps and scrapes along the way, I have had my knee reconstructed twice due to the love of the game, but I always follow Welsh rugby, it is kind of embedded in me really,” he said.

“I think being Welsh and from the Valleys, 90% of the people watch rugby and obviously all watch the international stuff, so I think it is just embedded in us really that we all are passionate about the rugby.

“I get the opportunity to paint a lot of Welsh inspired stuff, and a lot of the time, I get to paint rugby sceneries, recently I painted a Welsh dragon, with Dan Biggar about to kick a rugby ball, and some beautiful daffodils around him.

“I get to paint a lot of Welsh themed murals which never gets boring no matter how many times I do it – it is so cool that when people think of Wales, it is always Welsh Rugby.”

He added: “I have an area in my local town in Merthyr Tydfil which I am allowed to paint in, they kind of made it into a legal spot now which people can come and paint.

“I will add in the countries Wales are playing, along with a big Welsh dragon at the stadium, hopefully.

“I just want to inspire the younger generation really, using TikTok which is primarily a platform for younger viewers, to come and support, and put on the red jersey and come and support Wales and bring in the next generation to support the country.”