Across four weeks of brilliant match-ups in the Autumn Nations Series, the most eagerly anticipated encounter of the lot may be South Africa’s trip to take on France in Marseille.

The reigning world champions against the side who won the Grand Slam in March and are currently on a record ten-match winning streak.

The fact that it will take place at the Vélodrome in Marseille only adds to the appeal. Les Bleus have a formidable record in the stadium, including a 30-10 win over the Springboks back in 2002.

That match does not make our list of five of the best encounters the two teams have played in recent times, check out those that are in there:

We start in Durban with unquestionably the most controversial encounter the sides have played. In the semi-final of the World Cup in South Africa, a torrential downpour and violent thunderstorms pushed kick-off back by an hour.

Had the game been called off, France would have gone through thanks to their superior disciplinary record, so there was every reason to get it on, with brooms brought out to sweep away the standing water. 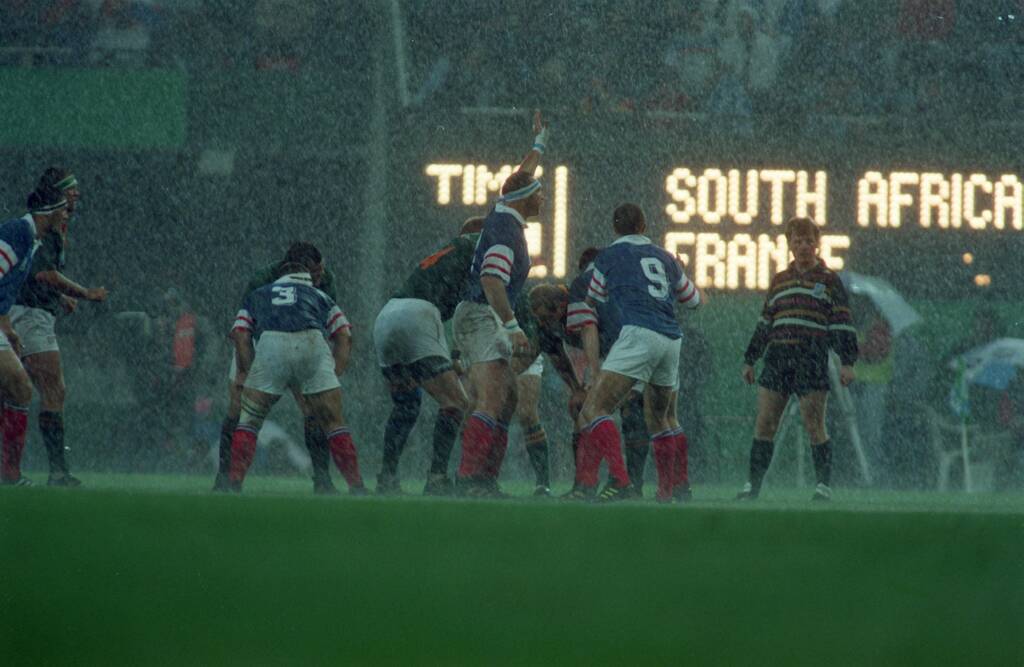 On the game itself, it was a tale of two big calls, Ruben Kruger scoring the crucial South African try from close range before Abdel Benazzi had an effort ruled out at the death in similar circumstances.

A week later, South Africa turned over the mighty All Blacks of Jonah Lomu and Francois Pienaar lifted the World Cup in the most famous final of all. France got some consolation when they ended a long winless streak against England in the third-place play-off.

If France had some reason to be frustrated at what had transpired two years earlier, there was no doubt over who the better side were at the Parc des Princes in 1997.

Les Bleus had won the Grand Slam, but this game proved the end of the road for a number of their greats, the likes of Laurent Cabannes, Philippe Saint-André and Olivier Merle>

They had no answer to the power and pace of the Springbok side, Pieter Rossouw was simply unplayable as he scored four tries all on his own.

The visitors ran in seven tries in total, hitting the front after just a couple of minutes and never taking their foot off the gas thereafter.

France have a strong record in South Africa, in fact they have beaten the Springboks more times away from home than on their own soil.

Few expected them to add to that strong record when they toured in 2006, but a new-look side produced a brilliant display in Cape Town.

Vincent Clerc grabbed two tries, Damien Traille another in his first game at fly-half, and Les Bleus ended a three-year unbeaten home run for the Springboks in emphatic fashion.

Cast your mind back to 2009, the experimental law variations were in full flow, South Africa had just beaten New Zealand three times in as many matches and looked like the best team on the planet.

They arrived in Toulouse looking to keep that run going against France and started strongly when John Smit crashed over from an overthrown lineout to lead 13-3 after half an hour.

From there, France turned it on. Fabien Barcella, the loosehead, was everywhere, playing a part in setting up Clerc’s try. The scrum battle swung decisively in the way of the hosts and Julien Dupuy did the rest, kicking penalty after penalty to see France home.

Who's ready for the #AutumnNationsSeries? 🎇

Before the first kick of a ball, we're hosting something special – and you can book your place 🎟

The most recent meeting was another thriller, South Africa winning it thanks to a sensational comeback.

The first half was an open affair dominated by the boot until Guilhem Guirado raced off the back of a maul to go over for the first try.

Mathieu Bastareaud was then the beneficiary of some South African uncertainty under the high ball early in the second half and France looked to be in control at 23-9.

South Africa hit back from the restart through Sbu Nkosi and almost hit the front only for Arthur Iturria to produce a stunning last-gasp tackle to deny Cheslin Kolbe.

They had the last laugh though, Bongi Mbonambi crossing from a rolling maul with the clock in the red to seal an unlikely victory.