The 2022 Rugby Championship kicked off in dramatic style on Saturday, with the world champions making a statement before a breathless turnaround took place in Mendoza.

It was felt before the first kick-off that this competition could be one of the most unpredictable the Southern Hemisphere has seen in years and its opening day did little to persuade otherwise.

Arguably the biggest fixture in international rugby got us off and running and it was South Africa who ran out 26-10 winners against New Zealand at the Mbombela Stadium to lay down an early marker.

Remarkably, this was the All Blacks’ fifth defeat in six games, while it was their first on South African soil for eight years and their heaviest loss against the Springboks since 1928.

While Australia went a long way towards putting their summer series defeat against England behind them by defeating Argentina 41-26 in a frenetic match at Estadio Malvinas Argentinas.

Here’s who stood out:

It needs multiple great individual performances to take down the All Blacks and South Africa captain Siya Kolisi led from the front.

The flanker finished a breathless afternoon with a 100 per cent tackle completion rate and flew around the park, seemingly the first to every breakdown.

His front-foot attitude inspired his team from the off. It took just eight minutes for the hosts to hit the front when Lukhanyo Am off-loaded superbly out of a tackle to allow winger Kurt-Lee Arendse to scorch in down the right.

Handre Pollard kept the scoreboard ticking over before the hosts put exclamation point on the result when Willie Le Roux pounced on a loose ball off the final play. 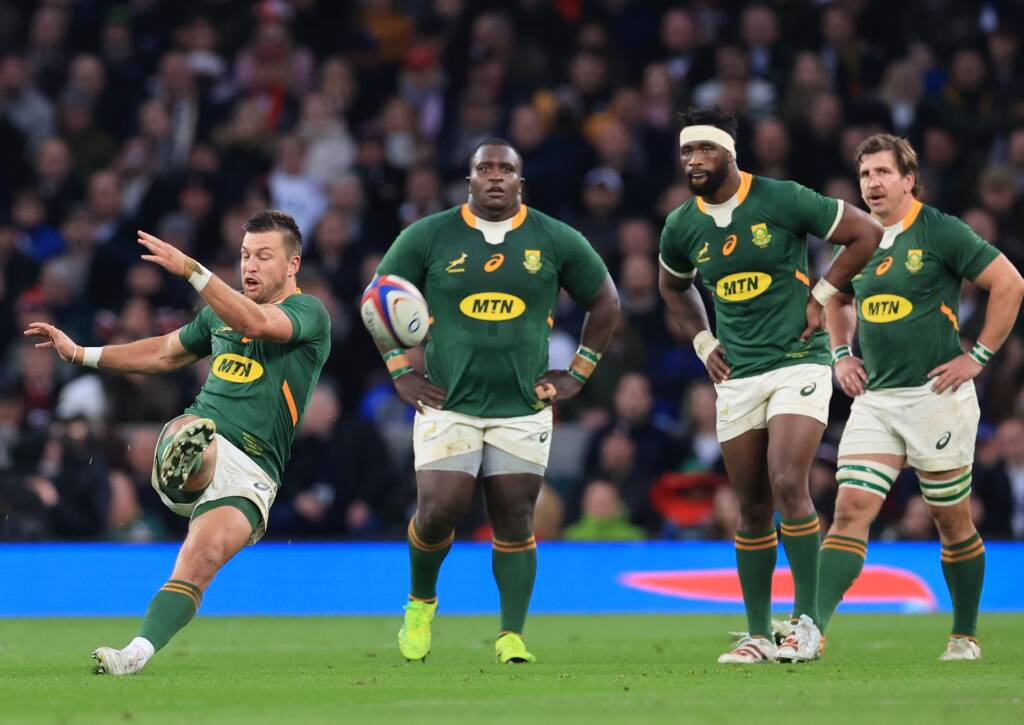 Kolisi then challenged his team to repeat the trick at Ellis Park next week.

He said: “The job is not done. We’ve got a great opportunity to come back and fix what we didn’t get right today.

“We’ve never been in this position before, where you can win two Tests against the All Blacks in South Africa. We’re looking forward to it.”

New Zealand struggled across the board at Mbombela but hooker Samisoni Taukei’aho stood head and shoulders above his teammates.

The 25-year-old carried with gusto and matched South Africa’s physical defence, often commanding two or three defenders to get him to the ground.

His line-out throws were solid and his scrummaging impressive, despite the concession of an early free-kick.

With Dane Coles struggling off the bench, Taukei’aho will likely keep the jersey.

Australia had to ride an early Argentina storm and Fraser McReight was the beating heart of an immense defensive performance.

The Pumas were relentless at the breakdown, the first to almost every ruck and pounding at the Wallabies’ line.

But McReight stood tall, holding his own, rarely ceasing ground and cashing in with a well-deserved try in the second half, barrelling his way over off the back of a driving maul.

That sparked the turnaround, with Australia then going on to score 24 unanswered points in the final 18 minutes to get their Rugby Championship campaign off to a dream start.

It was also special for it came just 24 hours after captain Michael Hooper withdrew from the squad, saying he was not in the right mindset to play – with McReight drafted into the team in his place.

Prop James Slipper said: “It’s a real proud moment for me and for the team because we really wanted to put in an effort that our fans can be proud off, but also our captain, Hoops, would be proud of.

“We were thinking about him all day and playing for him tonight.”

Argentina pushed Australia to the max and Pablo Matera was at the heart of a spirited Rugby Championship display.

The flanker was central to everything they did right, including scoring an early try when Santiago Carreras put him through a gap to score near the posts, with Emiliano Boffelli then kicking two penalties to one from Quade Cooper to open up a 13-3 lead.

Australia reduced that to 16-10 at the break and then took the lead after McReight’s try, but the hosts hit back with their second try when a brilliant counter attack led to Matera putting Juan Martin Gonzalez in the clear down the left.

Industrious at the breakdown and dangerous in the loose, it was another impactful performance from the 29-year-old, who continues to be a leading light for the Pumas.