Argentina lock Tomas Lavanini has been suspended for five weeks for the red card he received in his side’s Autumn Nations Series defeat to Ireland last month.

The 28-year-old was sent off in the 59th minute of Ireland’s 53-7 win over Los Pumas in Dublin after committing an act of foul play on Cian Healy at the breakdown.

Lavanini, who plays his club rugby for Clermont, has since been given a five-week suspension after appearing before an independent judicial committee via video link.

The ruling said: “Argentina second-row Tomas Lavanini has received a five-week suspension after appearing before an independent judicial committee via video link having received a red card for an act of foul play contrary to Law 9.20 (a) (dangerous play at ruck/maul) in Argentina’s international match against Ireland on 21 November, 2021.”

When speaking to the independent disciplinary panel, World Rugby said Lavanini “accepted that he had committed an act of foul play, but not that it was worthy of a red card.”

But the panel upheld the red-card decision by referee Matt Carley, stating there had been contact with the head of Healy “in circumstances where the contact was direct and carried a high degree of danger.”

As a result, the panel opted for a mid-range entry point of six weeks before taking off two weeks due to his “expression of remorse, his conduct at the hearing, and the fact that he has been taking active steps to ensure that his on-field aggression was appropriately controlled.”

A week was then added back onto Lavanini’s suspension due to his previous disciplinary record, with the red card he received against Ireland his third while playing for Argentina.

Lavanini’s five-week suspension means he will miss Clermont’s games against Biarritz, Brive and Toulouse in the Top 14, as well as the Champions Cup clashes with Ulster and Sale.

He has the right to appeal his suspension within 48 hours of World Rugby issuing the full written decision. 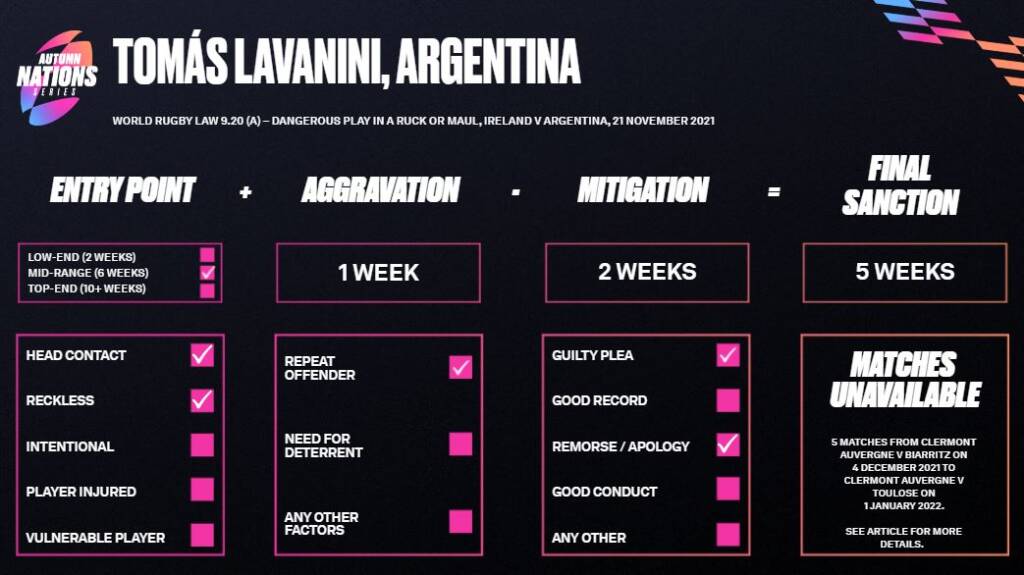 Reading: 3 mins
Previous Story Ireland star Caelan Doris crowned Player of the Series
Next Story What we learned from the 2021 Autumn Nations Series