Eddie Jones’ side came away with a 27-26 victory over the world’s No.1 ranked team, two years after they went down to the Springboks in the 2019 Rugby World Cup final.

Manu Tuilagi powers over in the corner 💪

All the talk last week against Australia was about Manu Tuilagi wearing the No.14 and it was down the wing he galloped for England’s first try.

Brilliant quick hands from his midfield partner Henry Slade under pressure allowed the Sale Sharks centre to charge into the corner but it came at a cost.

Crucially, the score gave England a flying start and got the masses at Twickenham up and roaring out of their seats just six minutes in.

But Tuilagi clearly tweaked something in the process of scoring and was immediately replaced by Max Malins with Joe Marchant moving into the centre from the wing.

Freddie Steward finishes off a great England attack to advance their lead#ENGvRSA pic.twitter.com/uHvk2CTFli

England are finding out there are several benefits to having a 6ft 5in physical presence marauding the back field.

Freddie Steward shone again at HQ, winning his second consecutive Player of the Match award but it was his determination and brute strength that helped him deliver England’s second score.

Before that, though, the Leicester Tigers full-back had shown his deft hands by sending Max Malins running away into acres of space.

Eventually, Ben Youngs fed Steward on the short side and he bundled over the top of Cobus Reinach with Makazole Mapimpi and Siya Kolisi powerless to stop him registering his second try in just five caps.

The score crucially put England 14-3 up which ultimately proved vital in leading to victory as it gave the men in white the safety net they needed to absorb the relentless pressure the Boks piled on in the second period.

Just five minutes into the second half with the score at 17-12 to England, South Africa came charging down the right wing.

The world champions looked certain to score with an overlap, but Siya Kolisi and Jesse Kriel got their wires crossed.

The skipper had his winger on the outside and looked set to put him flying away to score only for the pass not to go to hand.

Whether it was a case of a poor pass or Kriel overrunning the play, a glorious chance went begging for the visitors. 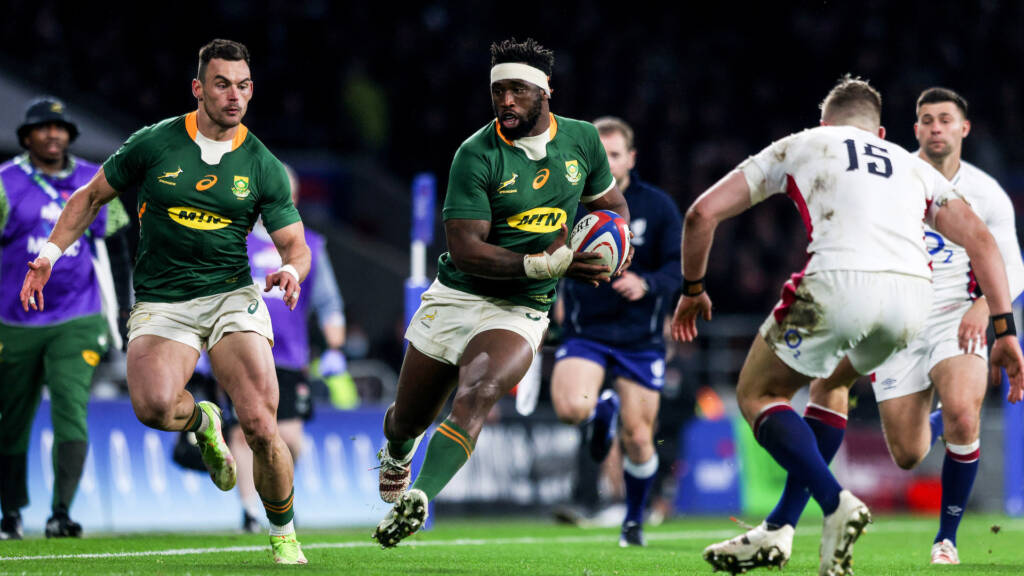 With England firmly under the pump in the second half, Max Malins came up with a moment of defensive brilliance.

The Springboks were battering away at the English line and flanker Kwagga Smith spun out of a tackle and tried to ground the ball over the line, only for winger Malins to latch onto the ball and prevent him from grounding.

A combination of quick thinking and strength enabled the Saracens man to hold up Smith and crucially, with the new laws, gave England a goal line drop-out and the chance to reverse momentum, take the sting out of the game and boot the ball down field.

“The moment of his life”

For all the talk about Marcus Smith, Henry Slade stepped up as first receiver in the 65th minute and did Damian de Allende with the eyes, sending Joe Marchant searing through the gap with a beautiful short ball.

The Harlequins man straightened up the covering Jesse Kriel and fed Raffi Quirke who steamed home and dived in for his first England try.

The man they call Faf de Quirke at Sale scored a crucial try against his club teammate’s Springboks colleagues to put England back in front.

The score came at a crucial point with South Africa thoroughly dominant after the break and was a key intervention and building block for England’s famous win.