Milestone matches can often be a damp squib, so coach Andy Farrell was pleased not to fall into that trap after Ireland marked a special occasion with a scintillating victory over Japan.

With fans back in the Aviva Stadium for an Ireland match for the first time since the start of the Covid-19 pandemic and multiple players reaching cap landmarks, the hosts put on an enthralling nine-try show to triumph 60-5.

It was a far cry from the defeat that the Brave Blossoms inflicted on Ireland at the 2019 Rugby World Cup and a fitting way for talismanic fly-half Johnny Sexton to mark his 100th appearance for his country, Tadhg Furlong to make his 50th and Dan Sheehan to celebrate his debut.

Sexton crossed for a second-half try, generally ran the show from No.10 and received a rapturous reception from the capacity crowd to leave his coach swelling with pride after a perfect day.

“It’s magnificent to have the fans back and we said it was a special day for us all and a privilege for us all to be involved with the fans back,” explained Farrell. “Hopefully they enjoyed themselves.

“Most of all, we’re so pleased that the performance matched the occasion for so many reasons but three special ones in particular – Johnny’s 100th, Tadhg Furlong’s 50th, which is a fantastic achievement, and then Dan Sheehan’s first one.

“To come out and perform like that and put on a nice afternoon for the fans is really fitting.” 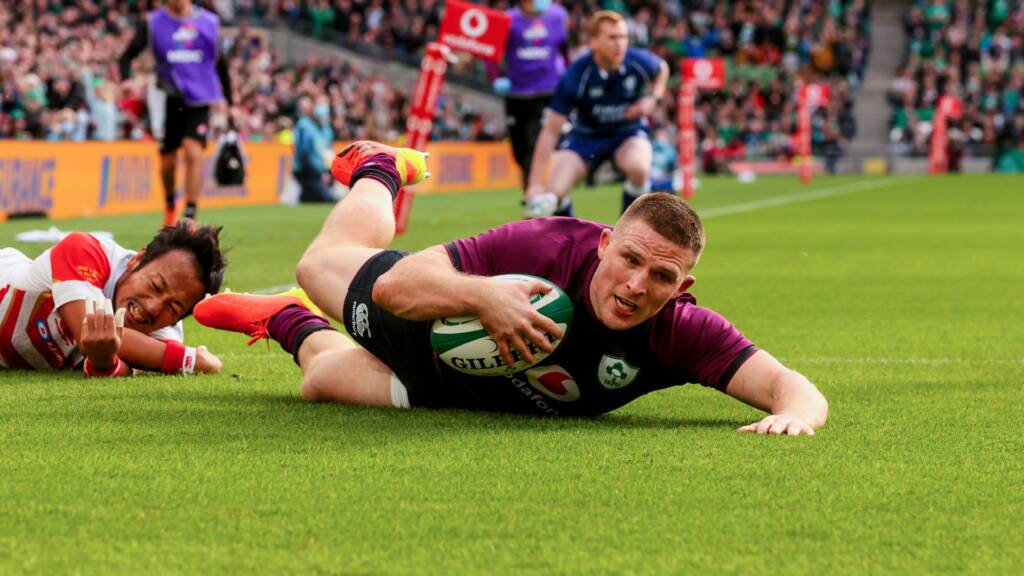 It was Conway’s second treble in an Ireland jersey, having crossed three times in a victory over USA back in 2018, and he was delighted by the team’s all-round performance, while also praising Sexton’s impact on Irish rugby.

“You always plan to try and play your best – it’s great that the team clicked so nicely,” said the winger.

“In the second half we weren’t as good as we wanted – against a good side it’s tough as they’ll always have their moment but all in all, it’s a good day and having people back here is amazing.

“Even on the bus ride in, the fans were great and with the lads having their first cap, their 50th and 100th caps it’s great to be involved. I’m very grateful.

“You’ve heard it all before with Johnny but it is properly real. He drives standards like no-one I’ve ever seen – he can be narky at times and brings a bit of tension to sessions but that’s what you need.

“It’s a physical sport and the detail is the key and he has us primed to go.”