The sensational emergence of Marcus Smith has blown open the debate over who should be handed the keys to No.10 by Eddie Jones.

After a fantastic finish to last season, Smith was reportedly set to be given the England 10 shirt by Jones in a changing of the guard after a frustrating fifth-place finish in the 2021 Guinness Six Nations.

But with a leg injury leaving him unable to train properly this week, the 22-year-old has only been named on the bench for England’s Autumn Nations Series opener against Tonga.

Owen Farrell will captain the Red Rose from fly-half on what will be his 94th cap for his country but his 100th international, taking into account his six Test-match appearances for the British & Irish Lions.

Having spent years implementing the tried and tested George Ford-Farrell axis at 10 and 12, the England head coach is heading in a new direction after omitting the Leicester Tigers fly-half from his plans for the Autumn Nations Series.

That in itself is a controversial move, with Ford arguably playing as well as he has done in recent memory, steering an unbeaten Leicester Tigers to the top of the English Premiership with his performances making him a prime candidate for Premiership player of the month.

However, Smith enjoyed a summer most can only dream of, winning the Premiership final with Harlequins before making his England debut in the 43-29 win over the USA.

It was then announced during his second game against Canada that Warren Gatland had come calling with Finn Russell an injury worry in South Africa for the Lions.

Smith pulled the strings superbly on his Lions debut as the men in red steamrolled the Stormers, capping a fairytale few months for the Harlequins star, but where does he fit in Jones’ creative masterplan?

You will be hard pushed to find a rugby fan that is not smitten with Smith’s electric pace, on-point decision-making and devilish goose step over the last few years.

A strong wave of popular opinion has been calling for his inclusion in the national side and Jones is set to oblige, although the wait for fans to see the youngster starting in an England team with all its best players available goes on.

The Quins No.10 has also been metronomic off the tee for his club, allaying fears that Farrell must be paired alongside him to kick the penalties that prove so vital at the highest level. 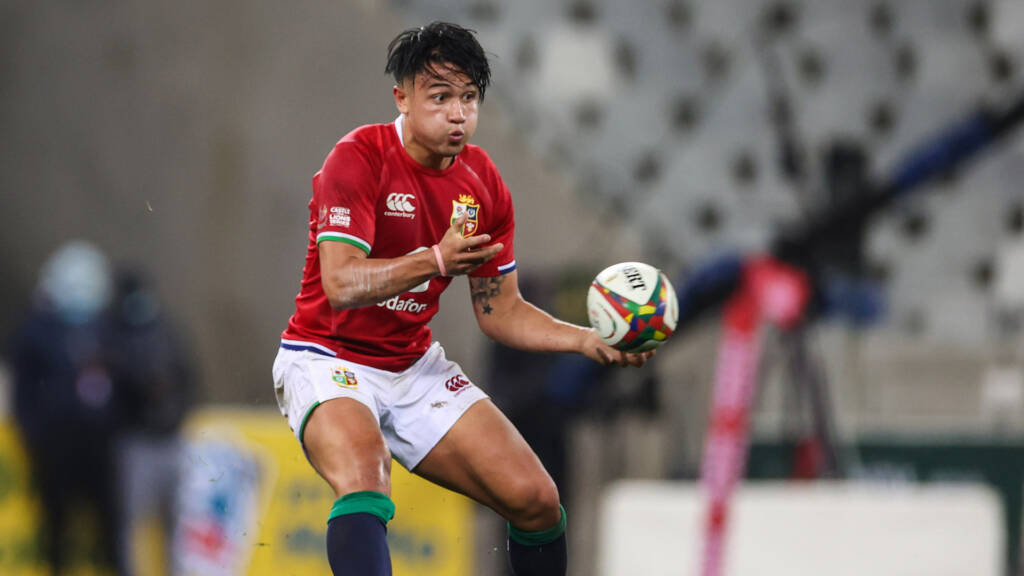 It’s hard to argue that Smith does not deserve a shot at fly-half when fully fit.

And if you set the captaincy issue aside, a centre partnership of Manu Tuilagi and Henry Slade, which memorably tore Australia to shreds in the 2019 Rugby World Cup quarter-final, outside him is quite the mouth-watering prospect.

The ballast of Tuilagi complemented by Slade’s guile and cultured left boot has the makings of an exceptionally balanced midfield and one that would help Smith thrive as a relative newcomer on the big stage.

Having said that, if you subscribe to the view that Owen Farrell must play as captain then he will most likely slot in at 12 alongside Smith in a brand-new axis.

Farrell has spent years at centre outside close friend and long-time teammate Ford but will have to start from scratch with the Harlequins playmaker, eight years his junior.

However, during the build-up to the start of England’ Autumn Nations Series campaign, the Saracens skipper revealed he is excited by the prospect of teaming up with Smith, his former roommate.

Farrell, 30, said: “He’s obviously a massive talent and a very exciting player. We’ve worked together before; he’s been into camp before when he was a bit younger. We shared a room together and things like that before, in the past, and it was good to get to know him a bit better over the summer.

“He’s a brilliant lad and he’s not just a very talented player but a proper student of the game. And that sounds a bit cliche, but I mean, he’s really bothered about getting better.

“He is really bothered about understanding the game more and he loves chatting about rugby. So, that made it easy for me to get on with him. He seems like he’s confident because to me it seems like he’s done the work, because he understands the game, because he knows exactly what he wants to get out of it.

“When he speaks, he speaks sense and that obviously helps your confidence and helps when it comes to playing in the position that he does and he is obviously doing that really well at the minute.

“He is someone that can unlock a game himself but has a brilliant eye for how to make a team work as well.

“So that sort of balance, you want to make sure that he keeps. And he’s got the attitude that that’ll do that for hopefully a long time yet.

“I’m happy to help wherever and obviously like I said before, Marcus is someone who loves talking rugby. Loves chatting about the game, loves trying to understand the game a bit better hopefully and you know if I can help him do that in any way possible, I’d love to.”

Saracens have made a seamless return to the Premiership this season and much of that has been down to Farrell regaining the kind of form that he admits he could not find last season.

For the first time on a Lions tour, Farrell was not the creative kingpin and had to make do with a bit-part role in South Africa which presumably has fuelled his comeback.

It is no coincidence that Farrell is impressing domestically at fly-half, that is undoubtedly his best position.

How you liking this @EnglandRugby team to face Tonga?

Drop your score predictions below 👇#AutumnNationsSeries

So, why not give him the chance to wear No.10 for England, especially if Ford is now surplus to requirements.

Just like Smith would be comfortable inside from Tuilagi and Slade, Farrell would also be best placed to thrive, as he has done previously on the rare occasions, he has started at first receiver.

It sounds obvious, but Jones stands much to gain from playing his captain in his primary position and although partially prompted by injury, Smith being eased into the side is not necessarily a bad thing for a young man who has had so much come his way in the last 18 months.