Much has been made of the law trials that have come into force in 2021, most notably the 50:22 that proved so crucial in South Africa’s recent win over New Zealand in the Rugby Championship.

Francois Steyn’s second-half cameo proved decisive and it was his pinpoint kick from inside his own half into the All Blacks’ 22 that earned South Africa a lineout from which they eventually scored a try that put them in front.

That law change has seen an immediate change in approach from teams, dropping extra players into the backfield and opening up space for teams to attack from inside their own halves, and it will no doubt be a factor in the upcoming Autumn Nations Series.

This weekend, however, it was a different law change that caught the eye as Boeta Chamberlain, the Sharks fly-half, slotted a trio of drop goals in the United Rugby Championship victory over the Ospreys.

What stood out was the fact that two of the drop goals came from goal-line drop-outs, a new aspect of the game that has been introduced.

The goal-line drop-out has been introduced in three situations – when the ball is held up over the line in-goal, if there is a knock-on from an attacking player in-goal or if an attacking kick is grounded by defenders in-goal (this does not apply to kicks at goal or kick-offs and restarts).

The law change has made the popular tactic of using the forwards to hammer away at the line from close range, a slightly riskier approach as the reward for being held up is no longer a five-metre scrum to the attacking side.

But Chamberlain showed at the weekend, that with an accurate kicker, the goal-line drop-out can be an invaluable source of points.

Sitting deep in the middle of the pitch, he twice collected long drop-outs from Gareth Anscombe, and with the chasing players still a long way back, he lined up two 40-metre drop goals, nailing them both.

The fact that it was a South African team who put this plan into place should not come as a huge shock. After all, Jannie de Beer etched his name into rugby history in 1999 with five drop goals against England in a World Cup quarter-final, while Steyn was well-known early in his career for being able to drop goals from his own half.

In fact, when Steyn slotted two drop goals in a Rugby Championship win over Australia back in 2007 including one from 45 metres on the angle, there were concerns that the tactic might catch on and teams would refrain from attacking and instead settle for notching points from near halfway. 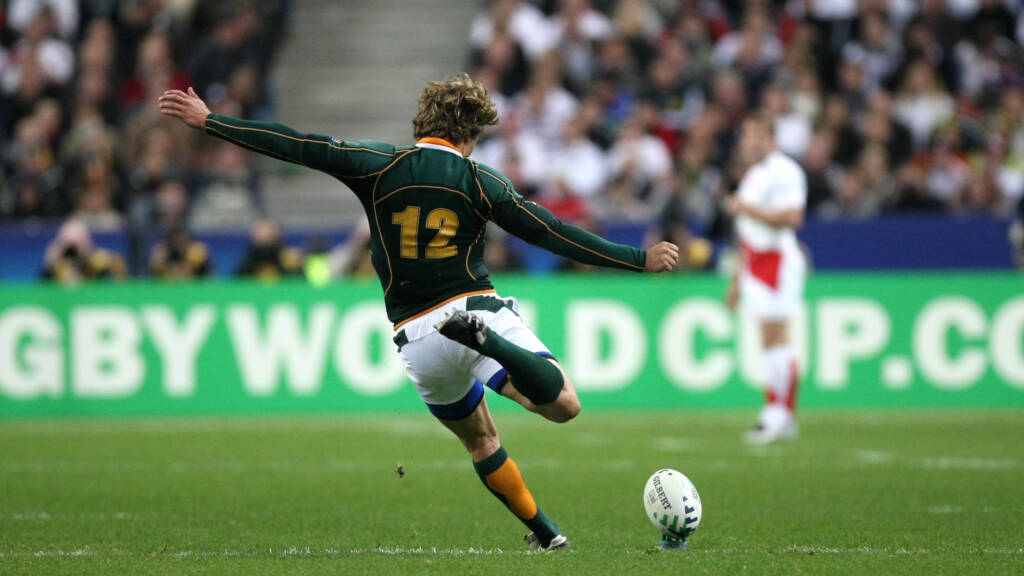 Of course, Steyn was one of very few players capable of dropping goals from that distance with any regularity, and even he only has three Test drop goals in a 15-year Springbok career.

So the idea that we will see every team looking to imitate Chamberlain’s approach is probably misguided.

What may happen though, is that teams will tweak their tactics for the drop-outs. We have already seen players run attacking kicks into the in-goal areas back out before booting clear, rather than dotting down and taking a 22m drop-out as would have previously been the case.

And if teams start to worry about a repeat of Chamberlain’s success, it may be that they go for higher, hanging drop-outs, much like restarts, where they give up territory but increase their chances of recovering the ball and most crucially give the opposition no time to line up the drop goal.

As with every law change, the unintended consequences can be just as fascinating as those foreseen by the lawmakers.

Friday night’s drop goals in Swansea were the first of those wrinkles to emerge. With each one, teams will adapt their approach and the game will evolve.

News
Previous Story Introducing Wales: All you need to know ahead of the Autumn Nations Series
Next Story Lions back on song in domestic action