The wait is over. On Friday night, James Lowe will finally make his long-awaited Ireland debut.

Ever since the New Zealand-born winger arrived in the northern hemisphere three years ago and made an immediate splash with club side Leinster, an international career has seemingly beckoned.

Residency rules meant November 2020 has been circled for some time in Dublin and now the day is almost upon us – and what a stage it is: Ireland v Wales in the Autumn Nations Cup opener.

Ireland boast such a deep playing pool across the board and are blessed on the wing, with the likes of Jacob Stockdale, Andrew Conway and Keith Earls all reliable Test performers, while Hugo Keenan showed what he can do with two tries on debut last month.

But Lowe will only add to that firepower and brings a domestic try-scoring record that will make opponents wince.

Of Maori and English descent, Lowe was born in Nelson – a town on New Zealand’s South Island and, like many rugby players, the oval ball was not the only one he excelled with.

He played basketball at high school and was also a senior schools athletics champion. Rugby only became his focus once education finished.

Lowe first broke through for local province Tasman, scoring eight tries across two seasons in 2012 and 2013 and that promise landed him a Super Rugby contract with the Chiefs.

He made his debut against the Crusaders off the bench, with the Chiefs 11-10 to the good, before scoring an intercept try from his own 22. Proving it was no fluke, he crossed 13 more times in the next two seasons to establish himself as one of the best up-and-coming wingers in the game.

The Maori All Blacks were quick to pick him in 2014 and he scored tries against the likes of Japan, Munster and USA across the next three seasons.

The one thing missing was a senior All Blacks cap. New Zealand’s loss, Ireland’s gain.

Leinster wanted to make a headline signing in 2017. They targeted Israel Dagg, a World Cup winner with New Zealand, but instead plumped for Lowe – a player many in Ireland had to google.

Yet it did not take long for the now 28-year-old to show he would add some stardust to a back division already packed with talent.

His Leinster debut came against Benetton in December 2017 and he hit the ground running with two tries, while further scores against Scarlets, Glasgow Warriors and Saracens suggested the Dubliners may just have made the signing of the season.

Lowe completed a dream first campaign by scoring in the PRO14 final as Leinster beat Scarlets 40-32. He finished with ten tries from 13 games and PRO14 and Champions Cup trophies. 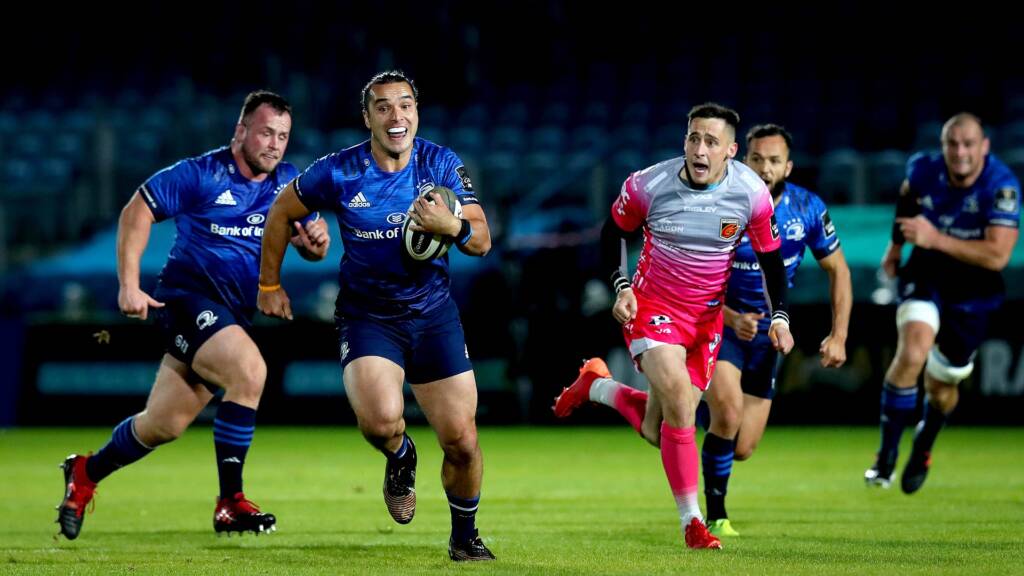 Eleven more scores followed in 2018-19 and Lowe’s knack of delivering in big games continued, with three tries against Munster, two more against Scarlets and four in the Champions Cup.

There were nine more scores last year as Leinster won all of their PRO14 matches and lifted a third straight title, while this season, he has three tries from two games.

Ireland scored the second-most points in the 2020 Six Nations with 132. Now, they’re adding even more firepower outside.

It says a lot about Lowe that he’s been thrown straight into the starting XV.

Initially called up ahead of Ireland’s final Six Nations matches against Italy and France, he was unable to feature as both were played before November 1 – the date he became eligible.

Yet he’s shown enough in training to warrant a chance on a big stage. Wales will be tricky customers and Lowe will directly face Liam Williams – a 67-capped veteran, who has won Six Nations Grand Slams and toured with the Lions.

Yet Farrell is convinced he’s ready.

“I think he brings an extra dimension to how we want to play,” said Farrell.

“We’ve all seen him play in the PRO14 and what he brings for Leinster, so hopefully he can definitely bring the same.

“Hopefully on top of that with a good performance at the weekend, he brings competition for places back into our squad, which is very important for us going forward.”

Friday night’s game is the curtain raiser to four weeks of drama. Lowe’s debut is an intriguing sub-plot that could make a major difference.