There is no shortage of intrigue and excitement around seeing what Georgia have to offer in the upcoming Autumn Nations Cup.

Group A fixtures against England, Ireland and Wales are a tough baptism of fire but the games will provide invaluable experience for the Lelos, who are eager to show they can compete with the northern hemisphere’s big guns.

Plenty of focus is on the heavyweight Georgian pack, with good reason. England head coach Eddie Jones has previously described Georgia as “the strongest scrum pack in the world” and several of their forwards play in the top divisions of England and France.

But while they are guaranteed to put their best foot forward at the set-piece and breakdown, Georgia will require a cutting edge in open play if they are to truly make an impression – which is where Demur Tapladze comes in.

The versatile back, who most often appears in the centres but is also comfortable on the wing, is among Georgia’s brightest young talents and will be eyeing up this competition as a springboard to put his name out there.

Tapladze currently plays for Lelo Saracens in the Georgia Championship Didi 10 but will hope to soon follow his compatriots across the continent and, at just 20 years of age, time is most certainly on his side.

Born in the ancient city of Kutaisi – twinned with Newport in Wales – in March 2000, Tapladze has stood out at age-group level for Georgia in recent years.

In the 2019 World Rugby Under-20 Challenge, Tapladze captained his side to a famous 17-12 victory over Scotland in their final Pool C game, having put in spirited displays in defeats against New Zealand (45-13) and South Africa (48-20) earlier in the tournament.

Georgia then beat Fiji 12-8 to go into the ninth-placed play-off with Italy, which they lost 29-12, though the junior Lelos had done enough over the tournament to mark themselves out as a force to be reckoned with. 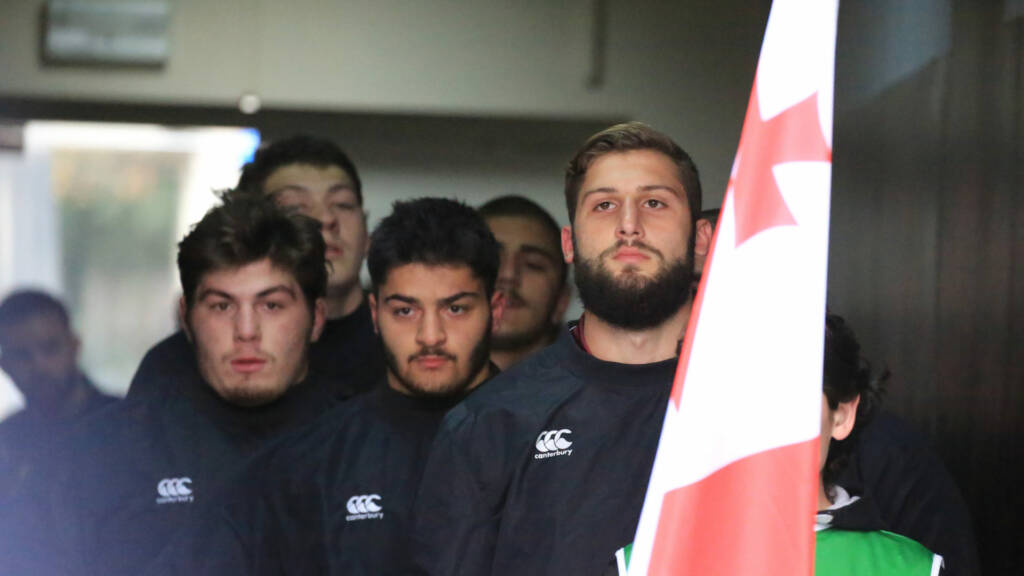 Two video clips from other Georgian age-group matches in 2019 illustrate the varied strengths of Tapladze in attack and defence.

Against Argentina Under-20s, Tapladze put in a superb try-saving tackle on Mateo Carreras as the wing went in search of a hat-trick, holding him up over the line in the process to keep his side a point ahead in a tight game they eventually went on to narrowly lose.

In December 2019, Tapladze was lining up for Georgia in the Under-19 International Series against South Africa and showed what he is capable of with ball in hand.

He hit a great line to break through the Springbok defence on his own 10-metre line, carrying the ball to the opposing 22 before timing his pass perfectly to set Saba Kuratashvili free for a superb team try which started 95 metres out.

Tapladze’s influence when coming through the Georgian ranks did not go unnoticed by the senior set-up and he made his full international debut against Belgium in the third round of this year’s Rugby Europe Championship.

The prospect, still 19 at the time, started at outside centre in a game Georgia won 78-6 to keep his side on track for a third straight title.

The following week, he was moved out to the wing and crossed for his first international try, finishing off an excellent move in a 39-24 victory over Portugal.

A wonderful @GeorgianRugby team move finished off by Demur Tapladze against Portugal in the fourth round of the Rugby European Championship 2020. pic.twitter.com/rcIgMyzThm

That was the last time Georgia played before the Covid-19 pandemic but Tapladze remained a firm part of their plans and started in the No.13 jersey in their autumn warm-up fixture against Scotland at BT Murrayfield in October.

Georgia were beaten 48-7 that night but will hope to give a better representation of their undeniable talent in the upcoming Autumn Nations Cup fixtures.

Tapladze is likely to be at the heart of their attacks and will be keen to show there is more to this Georgian team than their pack.

The 20-year-old is one to watch over the next month – starting at Twickenham on Saturday.