Scotland are relishing the opportunity to get stuck into the Autumn Nations Cup as they look to build on an impressive Six Nations campaign.

It’s a brand new tournament and, in Duhan van der Merwe, Gregor Townsend’s men have a newly-qualified winger at their disposal who looks ready to run riot.

Townsend has so far largely kept his powder dry in relation to the 25-year-old South African-born star, who became eligible on residency grounds over the summer.

He made a dream start to his international career, scoring on his debut in the autumn warm-up win over Georgia at BT Murrayfield, but was on the bench for the Six Nations conclusion in Wales and had little chance to make an impact in his 14 minutes on the field.

The Autumn Nations Cup could offer a chance for Townsend to unleash the Edinburgh star, whose distinctive powerful runs with the ball stuck to one of his giant mitts could become a feature of the tournament.

Since his arrival at Edinburgh in 2017, van der Merwe has had fans on the edge of their seats (or, more recently, sofas) with his electric speed.

His statistics in the PRO14 tell their own story. Between the start of the 2017/18 and the end of 2019/20, the wing scored 24 tries, never finished outside the competition’s top three for defenders beaten and gained an average of 960 metres per season. 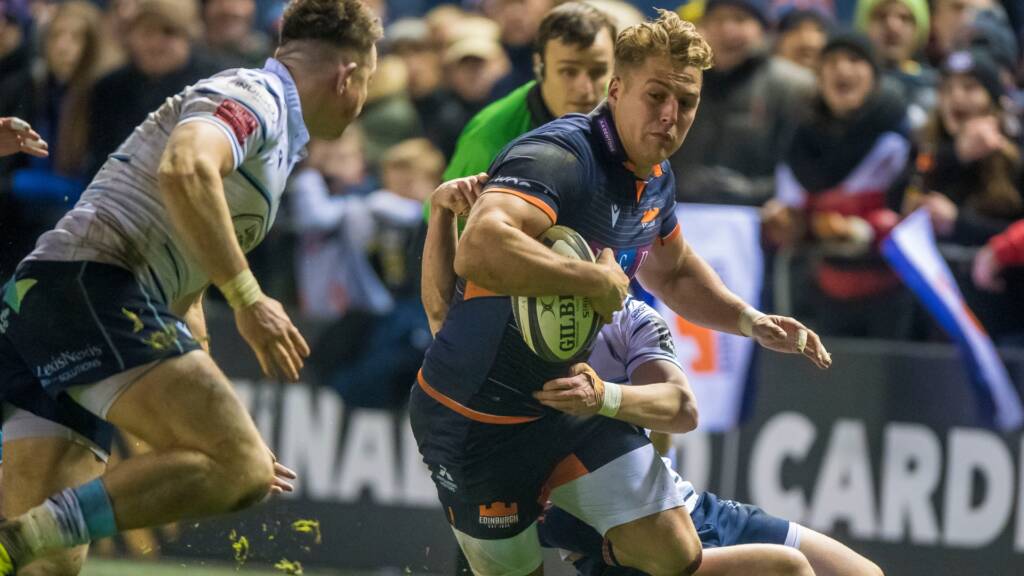 He saved his best for last season, topping the PRO14 charts for clean breaks (32), metres gained (971) and defenders beaten – with van der Merwe’s tally of 80 almost double the next highest tally.

But there is more to Scotland’s new sensation than mere numbers and watching him in full flow is where the true excitement lies.

He bounces off and runs through defenders as if they are not there and the slightest hint of space is enough for van der Merwe to capitalise upon.

He also has a penchant for the spectacular and there have been few better sights in European club rugby in recent years than van der Merwe tucking the ball under one arm, pinning his ears back and setting off for the line.

Scotland will hope he can translate that dominant club form onto the international scene and group games against free-flowing sides such as France and Fiji could be the perfect opportunity for van der Merwe to do just that, with space likely to open up and counter-attacks potentially the order of the day.

Van der Merwe may not be a born and bred Scot but that hasn’t done anything to quash the obvious pride he takes in representing his adopted nation.

He admitted to not wanting to take his debut cap off after the game against Georgia – “I think it suits me” – and paid tribute to his international teammates for providing such a warm welcome.

“It was a new environment, I was stressing about all the new calls being chucked at me, and obviously making new mates, but the Scotland camp is amazing,” he said.

“I’ve played for Edinburgh against Glasgow, so you are a bit like ‘oh, what are the boys going to be like?’ But everyone has been fantastic.

“I think is amazing as a new player coming in. I was really shocked at how they treated me, and how we became mates in a week and a half. I’ve loved it.”

He also recognises he will not be an unknown quantity for long, with Scotland’s opponents set to scour analysis tapes to try and stop him reaching full flow.

Meeting that challenge spurs on the wing, however, as he looks to raise his game to new heights.

“I was actually saying to myself after the first five minutes ‘wow, I feel really marked, there is not much space’,” he said.

“Obviously, in international rugby they really analyse you and stuff, so I just have to work around that and find ways to beat guys.

“Getting my first dot-down was incredible so if I can get a couple more in the future it will be even better.”

For all van der Merwe’s obvious qualities, the high standard among Scotland’s back-three options means he is not an automatic pick.

But therein lies another factor behind the whetting of the appetite for Scottish supporters – the chance to see the Edinburgh wing linking up with some supremely talented players in the backline.

With the similarly fast and furious Stuart Hogg, Blair Kinghorn and Darcy Graham also at Townsend’s disposal, among numerous other exciting backs, the potential within this Scotland team offers plenty of reasons for optimism.

The absence of Finn Russell, who set up van der Merwe’s debut try against Georgia, is a blow but the fly-half’s creative instincts will only throw further spice to the mix when he is fit again.

It all adds up to what could be a thrilling few weeks for Scotland fans, who will hope to see their new flying winger add to his two caps – and one try – over the course of the next month.