The duo make up two of three uncapped players in the 34-man squad for the new competition – alongside Shane Daly – and are in contention to earn their first Test caps in the Emerald Isle’s opening Group A fixture at home to Wales on November 13.

Lowe, 28, has made a blistering impact at provincial side Leinster since moving to Dublin in 2017, scoring 33 tries in 49 appearances for Leo Cullen’s men and picking up three PRO14 winners medals in as many seasons.

Born in New Zealand, Lowe trained with Ireland ahead of their final two Six Nations fixtures at the end of October, and is now in line for his first international appearance through World Rugby’s three-year residency rule.

While Farrell is hopeful the powerful winger can transfer his domestic form to the top level, he is also clear that Ulster fly-half Billy Burns is another prospective debutant he is excited about. 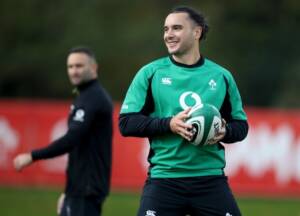 The 26-year-old returned to PRO14 action recently following a calf injury, and linked up with the national side having spent time with the squad at the start of their 2020 Six Nations campaign.

“I’m as keen as everyone to see how James goes at the international level,” Farrell said. “It’s a different level, but we’ve seen the potential of what he shows for Leinster and how he has fitted into life in Ireland.

“We’ll see whether that transfers or not onto the international scene, but if you were a betting man, you’d be pretty excited about seeing him play and doing well.

“Billy spent some time with us at the start of the Six Nations before we went into lockdown, and we were very impressed with what we saw of his skill-set and his game understanding in and around the team.

“He’s been working away to get back fit. We watched his game the other night against Cardiff Blues and we thought he just deserved that opportunity to come back in and meet back up with the team.”

Besides the new faces, Farrell hopes his whole squad of players can produce the perfect response to their Six Nations-concluding defeat in France, which saw the title drop into England’s hands.

With Autumn Nations Cup clashes against the Red Rose and Georgia following the Wales clash – before a placing match that will determine their final position – Burns’ Ulster colleague Jacob Stockdale is hoping for further minutes at full-back.

While Farrell acknowledges there are still things for the 24-year-old to improve on, he is no doubt of the qualities he possesses, with Stockdale having scored 17 tries in 30 Test appearances so far.

Farrell added: “There’s one thing for sure, Jacob is a dangerous player. Everyone was raving about his form against Italy, and there are one or two things he talked about – the fundamentals of his game etc. – that he needed to pick up.