Lloyd Williams is hoping to build on his recent international return by firing Wales to Autumn Nations Cup glory this autumn.

The 30-year-old scrum-half was called into Wayne Pivac’s squad as cover for the injured Rhys Webb ahead of Wales’ Six Nations-concluding defeat at home to Scotland, coming on as a 72nd-minute replacement for his first cap since November 2016.

Wales endured a tough Six Nations campaign but swiftly return to action in the Autumn Nations Cup against Ireland on November 13, the first of three Group A ties ahead of a placing match to determine their final position.

Having made 28 appearances and played an integral role in Wales’ 2011 and 2015 Rugby World Cup campaigns, Williams fell out of favour with the national side but never lost hope of a recall. 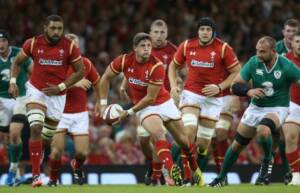 And having had his first taste of Test-match action for four years, the Cardiff Blues star is eager to get more minutes under his belt and play a key role in his country’s bid for the inaugural title.

“It was a slightly unexpected call from the Welsh selectors,” Williams said. “It was a bit out of the blue, but it was great to join up with the squad and everyone was very welcoming.

“There are a lot of boys I knew before who are still in the Welsh squad, but there are also a few new faces. Everyone is really positive and, on the whole, things are quite similar to when I was in the squad before.

“I’d never given up hope of playing for Wales again. It was always a goal of mine and will be as long as I am playing.

“Things at the Blues are going well and with Rhys [Webb] getting injured the door opened for me to come back in. Now I’m just looking to improve on that and carry things on, and it would be great to get a few more caps.”