The 2019 Grand Slam champions slumped to a fifth-place finish in the disrupted championship, falling to a 14-10 defeat at home to Scotland in Round 5 following a near-eight-month break in play.

Adams has enjoyed plenty of success in 26 Test caps since his debut against Gregor Townsend’s men in 2018, including being an integral part of last year’s clean sweep triumph, and finishing as the 2019 Rugby World Cup top try-scorer on Wales’ run to the semi-finals.

And off the back of defeat at Parc y Scarlets last time out, the 25-year-old is clear he and his teammates are working tirelessly behind the scenes ahead of their next competitive clash against Ireland on November 13.

“The result against the Scots wasn’t what we wanted, but that doesn’t mean we’ll dwell on it,” Cardiff Blues star Adams said. “It’s a line in the sand now.

“Every player will have a patch in their career where they don’t pick up a few wins. It’s about how you react when your backs are against the wall.

“We’ve got a totally new competition in the Autumn Nations Cup coming up, so we have to get our minds right, bodies right and put our best foot forward in Dublin.

“We’re working extremely hard in the week to do that. We are putting in some mileage to put ourselves in the best place to perform.” 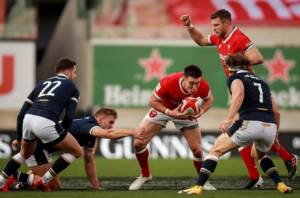 Following their clash with Andy Farrell’s Ireland at the Aviva Stadium, Wales will complete their Autumn Nations Cup Group A endeavours at home to Georgia and England before a placing match will determine their final position.

While unsure of the specific issues limiting the team’s success under the stewardship of boss Wayne Pivac so-far, Adams believes it simply takes time to adapt to new ideas and that having a Six Nations campaign behind them will stand them in good stead.

He added: “It’s difficult to put your finger on what’s going wrong at the minute. Don’t get me wrong, our performances need to improve and we need to get results, but the Six Nations this year was Wayne Pivac’s first tournament and he was implementing his philosophies.

“We’ve put pressure on ourselves from the results we’ve had recently and we understand the frustration the fans must feel. Everyone expects us to win and that’s great because we want to win every single game.

“That’s going to be the key focus for us moving forward – to do everything in our control to come out on the right side of the result.”