Gregor Townsend is demanding more from his players in the Autumn Nations Cup after Scotland ended their Guinness Six Nations campaign on a high against Wales.

Stuart McInally’s try and points from the boots of Finn Russell, Adam Hastings and Stuart Hogg catapulted the visitors to a 14-10 triumph in Llanelli after Rhys Carre had dotted down for Wales.

The result marked Scotland’s first victory in Wales for 18 years and saw them finish their Championship with 14 points after further impressive victories over Italy and France.

Scotland will face France, Italy and Fiji in their Autumn Nations Cup group and Townsend believes his versatile players have even more to offer.

It was a huge squad effort in Wales this afternoon.#AsOne pic.twitter.com/7k3uUDqiBW

“There’s still a lack of cohesion at times – it’s the first time that team has played with players coming back into the squad this week.

“But the fundamentals are there – the set piece and the defence and we know with some of the individuals in our squad we can do some really good things in attack.

“You get confidence from games like that, it’s character-building away from home so we’ve got to make sure we keep the momentum going into the Autumn Nations Cup.

“We do have players who can play multiple positions – Stuart Hogg has stepped up at No.10, Blair Kinghorn moved around, Scott Steele, for his first cap on the wing had to make a few tackles.

“They won’t remember which position they played, just the fact they were part of a winning performance.

“A lot of the bench had a big impact so it was a whole squad effort and I’m really proud of the effort.” 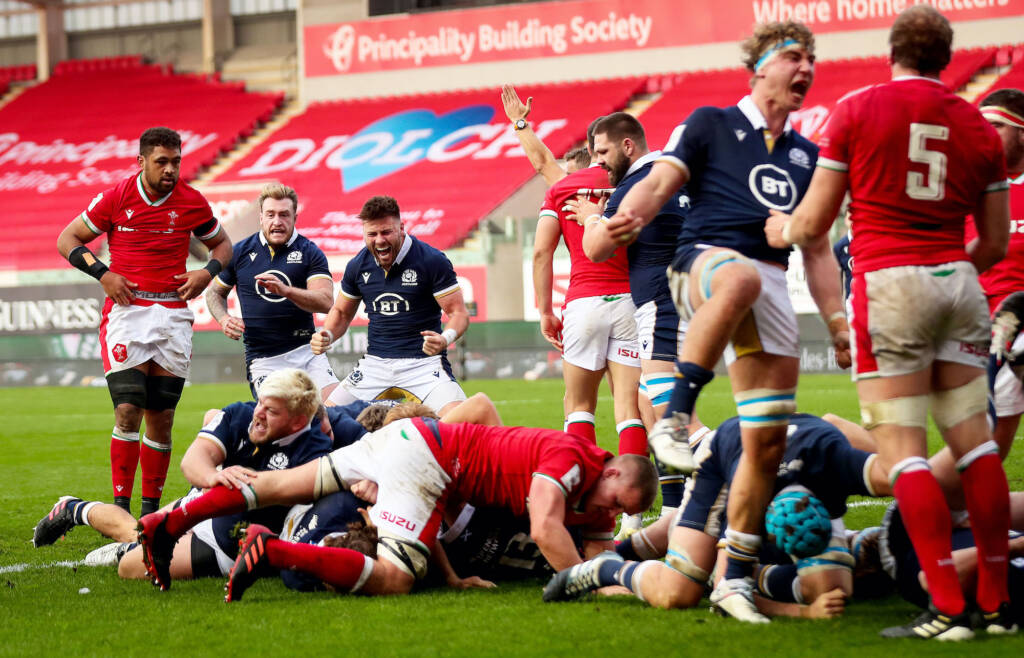 Wayne Pivac’s Wales led at half-time after prop Carre’s first try for his country was converted by Dan Biggar.

But Russell and Hastings kicked penalties for Townsend’s side to keep them in contention at Parc y Scarlets.

The decisive moment came just after the hour mark, as Scotland’s rolling maul crashed over the line and McInally dotted down to hand the visitors the advantage.

The match represented a landmark moment for Wales veteran Alun Wyn Jones, who made his 149th Test appearance to overtake New Zealand’s Richie McCaw as the most capped international player of all-time.

Boss Pivac watched his side fail to mark the occasion with a performance to savour, however, and says improving Wales’ prowess at set-pieces is top of the agenda before facing England, Ireland and Georgia next month.

A disappointing afternoon in Llanelli, but we have to mark the achievement of this great man.

Watch as stars of the world game pay tribute to our captain on the day of his record-breaking 149th test appearance.

“We’re very disappointed – it was difficult conditions with the line-outs,” said Pivac.

“Both teams had to play in it and I think the breakdown was the big difference.

“Certainly we’ll need to have a look at that area of the game and make sure that we get it right for the next game.

“We’re obviously disappointed with this result but we’ve got to make sure that in the next game we improve the areas we need to and get a much better performance, which we need.

“Certainly the set-piece didn’t go as well as we’d have like and in the breakdowns, which was a massive part of the game.

“Now we’ve put a line in the sand and we have to look forward to the Autumn Nations Cup.”